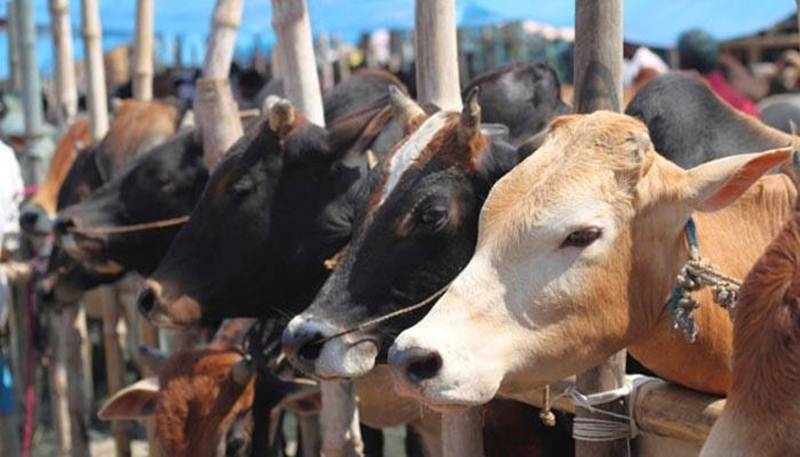 Ahmedabad, Public butchering of a calf in Kerala recently by Congress workers led to a clash between workers of the Congress and the BJP outside a venue here where seers and religious leaders had gathered to condemn the Kerala incident.

Police detained around 10 workers of the Congress after the clash.

The incident occurred on the campus of Sola Bhagwat Vidyapeeth, where the Gujarat Gau Seva and Gauchar Vikas Board vice-chairman Chaitanya Shambhu Maharaj began his two-day fast today in protest against the slaughtering of the calf as a protest against the Centre’s notification banning sale of cattle in open market.

Several seers and religious leaders, including Dilipdasji Maharaj of Jagannath temple, were present on the dais with Chaitanya Shambhu Maharaj.

Though the event was supported by the state unit of the BJP, some local Congress leaders reached the venue to “extend their support”, saying they too revere the cow as a sacred animal and condemn the slaughter incident.

However, presence of the Congress leaders at the venue irked BJP activists who confronted them, leading to a heated exchange of words, which soon turned violent.

The visuals of the clash, streamed live by some local news channels, showed the local BJP leaders and workers exchanging blows with their Congress counterparts.

Later, two groups can be seen pelting each other with stones and the Congress workers fleeing the spot.

Upon learning about the incident, the police rushed to the spot and detained around 10 local workers and leaders of the Congress, including city unit president Chetan Raval,
former city mayor Himmatsinh Patel and youth Congress leader Parthiv Raj.

“At least 10 Congress workers were detained from the spot. The situation is under control now,” said an official attached to Sola police station.

According to BJP general secretary K C Patel, the Congress workers came prepared with an intention to disrupt the event.

“BJP workers confronted them because they came here with a banner saying ‘Save Cows-Eliminate BJP’. Congress workers did not come here to support our cause. They had a hidden agenda to gain political mileage. It was them who hurled stones at us,” Patel told reporters.

In his address, Chaitanya Shambhu Maharaj, who is associated with the BJP, held Congress responsible for the ruckus, saying BJP workers will retaliate if provoked.

“Instead of feeling sorry for what happened in Kerala, Congress is attacking us. Though we believe in non-violence, we will retaliate if needed. As I started my 48-hour fast today, even Muslim brothers extended their support. On the other side, Congress indulges in hooliganism,” he said.

Before they were detained by police, the Congress leaders showed injury marks to media persons and claimed that they were attacked by the BJP wihout provocation.

“We came here to meet Shambhuji to tell him that even Congress is against cow slaughter and we are also sorry for what happened in Kerala. We too wanted to share the stage with him as a sign of solidarity. But, BJP leaders first prevented us and then manhandled us,” Parthiv Raj claimed.

Chetan Raval, who showed his torn shirt to the media, said the cow does not belong to only one party.

“We came here with a clear message that Congress is also against slaughter of cow. BJP should understand that one party can not have its exclusive rights on the cow. I condemn the attack by BJP on us,” said Raval before his detention.

In a controversial move, the Central government recently notified rules to ban sale and purchase of cattle for slaughter at animal markets, triggering a huge row with the chief ministers of West Bengal and Kerala opposing the move and a string of protests erupting in some states.

During such protests in the Left-ruled Kerala, a calf was slaughtered on May 28 allegedly by workers of the youth wing of the party.