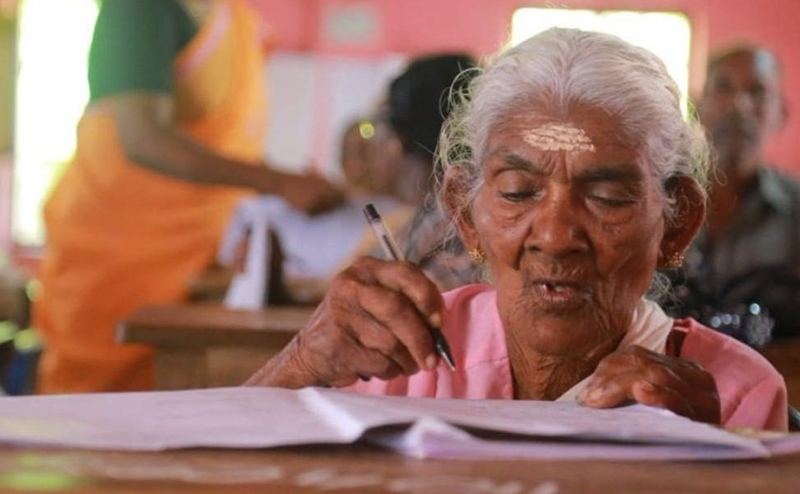 Thiruvananthapuram: Proving that age was no barrier for learning, a 96-year-old woman has secured high marks in a literacy examination held in Kerala. Karthyayani Amma, the oldest candidate who appeared for the ‘Aksharalaksham’ programme of the state-run Kerala State Literacy Mission Authority, scored 98 marks out of 100.

A native of Cheppad village of Haripad in Alappuzha district, the nonagenarian Thursday received an “Aksharalaksham certificate” from Chief Minister Pinarayi Vijayan as a token of recognition for her achievement.

Karthyayani Amma scored 38 out of 40 in writing, and full marks of 30 each in Mathematics and reading, Mission Director P S Sreekala said. The woman has become a role model for thousands of people who wish to be part of the literacy programmes, she said.

“The present phase of the initiative has covered 2000 wards across the state. In the next phase, we are planning to join hands with local bodies and expand the programme,” she told PTI.

“The aim of the Literacy Mission is to make the state fully literate in four years,” the official said.

According to the 2011 census, there were around 18.5 lakh illiterates in the state.

“Aksharalaksham” is one of the flagship literacy programmes of the LDF government to achieve 100 per cent literacy in the state.

Of the total 43,330 candidates, who appeared for the test, 42,933 candidates have cleared the examination across the state, she noted. The 100-mark initiative had tested the reading, writing and mathematics skills of the candidates. To pass the exam, one should secure at least nine marks out of 30 in reading, 12 out of 40 in writing and nine out of 30 in mathematics. Those who have cleared the examination can enrol the fourth standard equivalency course of the Literacy Mission.

Palakkad has the highest number of winning candidates-10,866, followed by Thiruvananthapuram-9412 and Malappuram-4065. To wipe out illiteracy completely, the Mission has chalked out several programmes, especially among the marginalised groups like tribals, fisherfolk and slum dwellers.