Katrina introduces her little co-star from Tiger Zinda Hai who talks more than her, see photo 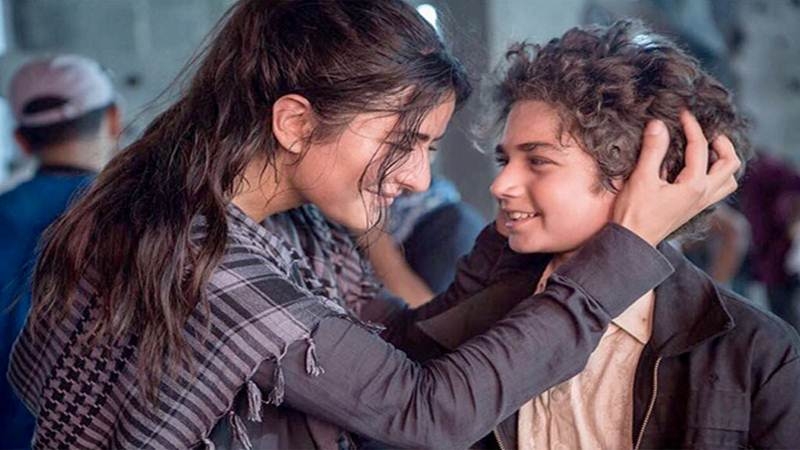 Katrina Kaif’s Instagram handle should be followed religiously since her posts and the accompanying captions are damn impressive. It’s an icing on the cake when she posts sizzling hot pictures, as she did ten days ago. Katrina Kaif had then posted a picture of her wearing a red-hot bikini. This time, however, Katrina Kaif won her heart for a very cute reason.

The actress yesterday posted a picture showing her showering love on child actor Jineet Rath. Incidentally, Jineet had worked with Katrina Kaif on her 2011 hit film ‘Mere Brother Ki Dulhan’, directed by Ali Abbas Zafar. Both these performers have now reunited for ‘Tiger Zinda Hai’, which incidentally is also directed by Ali Abbas Zafar. The picture in question is taken on ‘Tiger Zinda Hai’ sets in Abu Dhabi and the caption reads, “I’ve finally met someone who actually talks more than me ……. much more ….. my mbkd co-star’s grown up #tigerzindahai #abudhabi”

Jineet Rath played the role of the younger version of Ali Zafar in ‘Mere Brother Ki Dulhan’. He played the crucial role of the deceased son of Aamir Khan and Rani Mukerji in the 2012 suspense drama ‘Talaash’. He also had a small role as Prabhu Dheva’s son in ‘ABCD’ – ‘Any Body Can Dance – 2’.

‘Tiger Zinda Hai’ the sequel to the 2012 blockbuster ‘Ek Tha Tiger’, starring Salman Khan and Katrina Kaif, and directed by Kabir Khan. Both the superstars have reunited for the sequel and the film is all set to release during Christmas 2017.