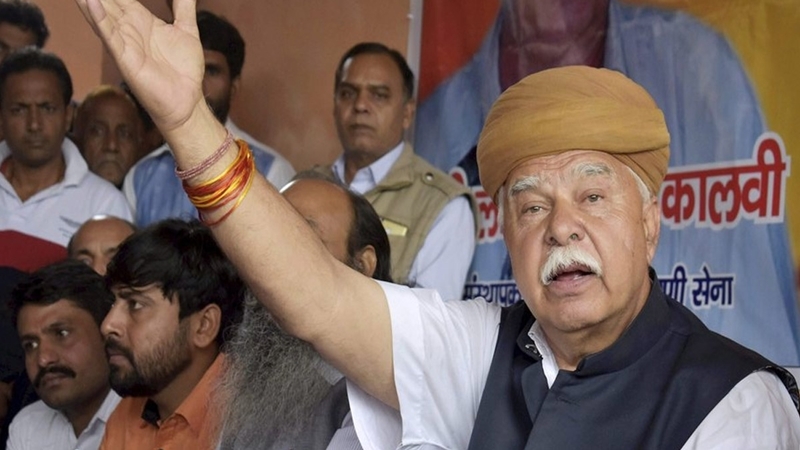 New Delhi: Declaring that it has “accepted” filmmaker Sanjay Leela Bhansali’s offer, the Karni Sena on Monday said it is willing to watch his film ‘Padmaavat’, ahead of its release scheduled later this week on January 25. “We have received a letter saying that we want you to watch the film. Bhansali may be expecting that we will refuse, but we are accepting his offer. We are ready to watch,” Karni Sena chief Lokendra Singh Kalvi said,

The statement came after his announcement that he would not allow Bhansali’s ‘Padmaavat’ to be released “at any cost”. Members of the Karni Sena had, earlier in the day, mounted their protest by burning tyres on roads connecting Ujjain to Nagda, Dewas to Maksi and Agar to Kota. In his invite, Bhansali has promised the KArni Sena that “the film will make the entire Rajput community proud”.Meanwhile, the movie is back on the Supreme Court’s board, two days ahead of its pan-India release.

The Chief Justice-headed Bench that quashed ban on the film by the state governments last Thursday agreed on Monday to hear once again a plea by the Rajasthan and Madhya Pradesh governments. Chief Justice Dipak Misra, who is already tied up with a Constitution Bench that will resume the Aadhaar hearing on Tuesday, agreed on urgent hearing of the  matter and ordered its listing immediately. The Constitution Bench will sit from 11.30 to 1 pm and again from 2.30 PM after disposing of ”Padmavat” and other cases.

In the meantime, the Karni Sena too has moved the top court seeking a relook at the January 18 order by which the top court had paved the way for the film’s countrywide release.

SHOPPING MALL ATTACKED: The Haryana Police on Monday registered a case and started an investigation into an attack on a portion of the Kessal Mall in Haryana’s Kurukshetra town, around 100 km from here. The attack is being linked to the screening of the controversial film “Padmaavat”. Police officials said that CCTV footage of the mall was being examined in which some unidentified miscreants were seen vandalising a portion of the mall on Sunday evening. The miscreants, who were said to be opposed to the screening of the film, came with their faces covered.