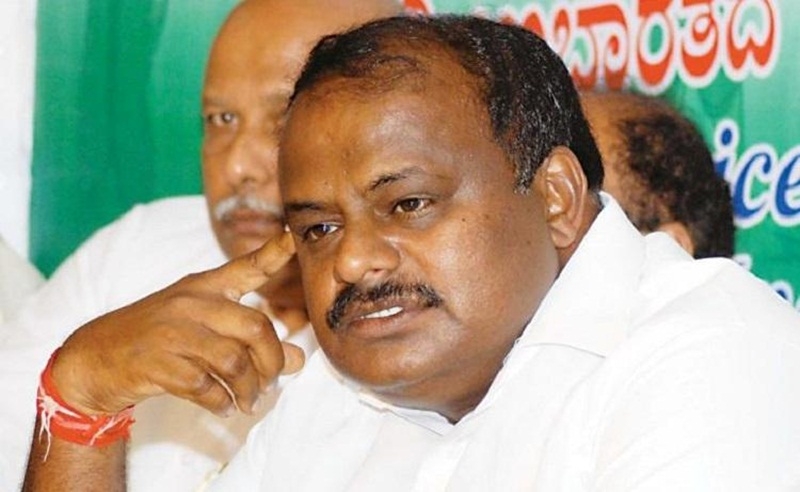 Bengaluru: A combative JD(S) chief H D Kumaraswamy on Wednesday threatened the BJP saying that if they ever try to poach “my MLAs, I will hit back and take away double the number from your side. If you (BJP) try to once again try out Operation Lotus, it will boomerang. We are capable of striking back.”

With talks that the BJP is trying to woo a few JD(S) MLAs, HDK dropped a Rs 100 crore ‘bomb’ alleging that the saffron party had offered Rs 100 crore to each of his 32 MLAs and plum Cabinet posts, if they switched sides. This is all black money stashed by the BJP in foreign banks, he said.

But there were hardly any takers for HDK’s Rs 100 crore bomb. The BJP denied the charge minutes later with Union Minister Prakash Javadekar, who is in-charge of Karnataka, saying that his party believed neither in money power, muscle power or horse trading. However, minutes after HDK’s charge, was more than a coincidence when the BJP alleged that the Congress was tapping its phone lines.

Coming back to Kumaraswamy, he revealed that 10-20 BJP MLAs were in touch with him and were ready to switch sides. Half way through the press conference, HDK lost steam and was seen distressed and nervous. That’s when he played the emotional card and almost came to tears. He said he did not go after power or the Congress. Power was thrust on him and despite ill health (he has a heart problem) he was ready to serve the people of Karnataka once more and uphold the secular fabric of the state.

Kumaraswamy also played his cards of a humble and dutiful son, a modern Caesar not hankering for power and that of a duty-conscious servant of the people of Karnataka. He said when he tied up with the BJP in 2006, he had disobeyed his father and brought a “black spot to his secular image. I want to wipe this out by keeping the BJP out of power and please my father.” He added: “I disobeyed my father when I aligned with the BJP earlier. That was a mistake. My father is old and at this age, I do not want to upset or disobey him.”

He said the Congress has given him unconditional support and the people of Karnataka wants him to rule as they were happy “with my earlier developmental track record of 20 months rule”. The electorate has not given a clear mandate to anyone. Hence it is our duty to cobble together a workable alliance, he said. The BJP has no moral rights to criticise us as they had misused power to snatch power in Goa, Manipur and Meghalaya. He added that the BJP was using central agencies like the Income Tax department to threaten his MLAs.

Prime Minister Narendra Modi had nothing to do with the win of the BJP in Karnataka, he said, once again playing the north India-south India card. He admitted that many Congressmen, including Siddarmaiah, had abused him, but all that was during electioneering. This should be forgotten and we should move forward for the welfare of the state, he added.