Karnataka elections 2018: Congress stages protest as Yeddyurappa is sworn in as Chief Minister 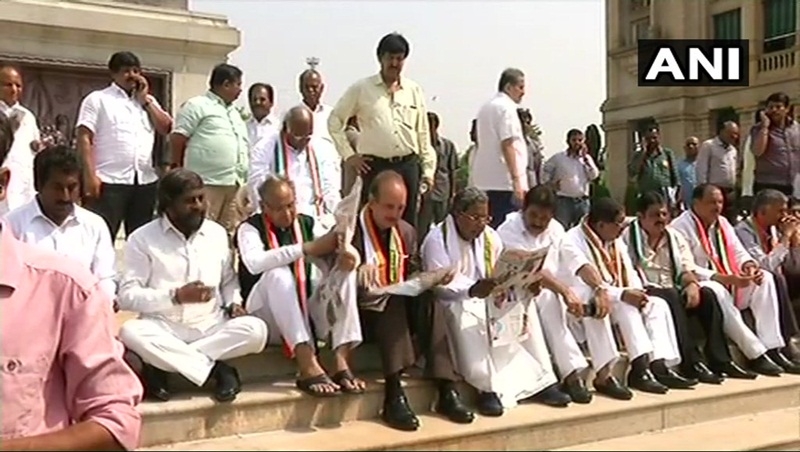 Bengaluru: Congress leaders today staged a protest in front of the Gandhi statue next to the Vidhana Soudha, the state secretariat, against the swearing in of B S Yeddyurappa as chief minister.

Janata Dal (Secular) legislators and leaders will also be joining the agitation soon, party sources said. Speaking to reporters, Siddaramaiah termed as “unprecedented” Governor Vajubhai Vala’s decision to grant 15 days time to Yeddyurappa for proving majority in the assembly. He said Yeddyurappa would now have to furnish the list of MLA’s supporting him immediately.

Yeddyurappa was administered the oath of office and secrecy by the Governor at a ceremony at Raj Bhavan amid loud cheering by his supporters.  Earlier today, the Supreme Court refused to stay the swearing-in after a rare post-midnight courtroom battle unfolded dramatically over the Congress-JD(S) combine’s legal push to stall government formation.

After a nearly three-and-a-half-hour hearing beginning 2:11 AM, a three-judge apex court bench also made it clear that the swearing-in and the government formation would be subject to the final outcome of the case before it. The bench, comprising justices A K Sikri, S A Bobde and Ashok Bhushan, posted the matter for further hearing tomorrow morning and ordered placing before it the letter of support from MLAs presented by the BJP to Karnataka Governor Vajubhai Vala while staking claim to form the government.