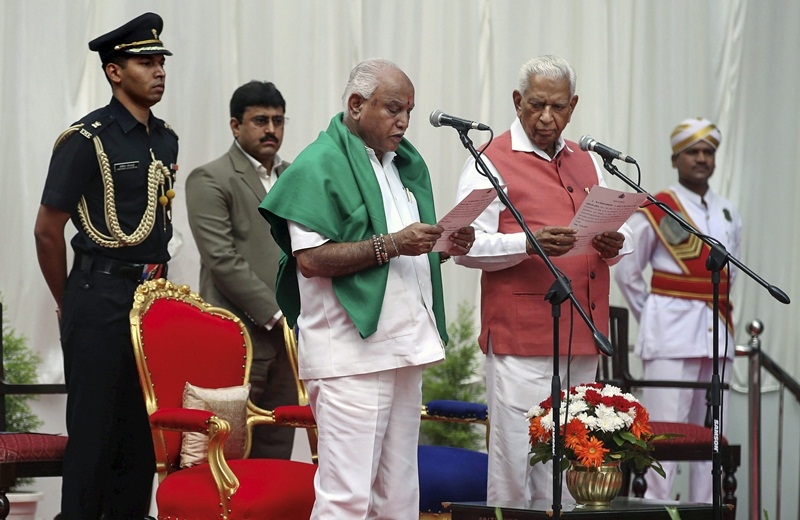 New Delhi: The Congress today sought the recall of Karnataka Governor Vajubhai Vala, after BJP legislature party leader B S Yeddyurappa was sworn in as the chief minister.

The Congress, which in alliance with the JD(S) had made a bid to form the government in the state, referred to a 2011 tweet of Prime Minister Narendra Modi seeking the recall of the then Karnataka governor and said, “We agree”.
“Governor of Karnataka is bent upon destroying India’s federal structure , urged PM to ask the President to recall him,” Modi, who was then the Gujarat chief minister, had tweeted on May 19, 2011.

Modi and his BJP had sought the recall of the then governor, H R Bhardwaj, alleging that he was “harassing” the BJP-led state government and “acting in a partisan manner”.

Yeddyurappa was sworn in as the chief minister of Karnataka for a second time, after an overnight high-voltage legal battle in the Supreme Court.

Yeddyurappa was administered the oath alone, hours after the Supreme Court refused to stay his swearing-in.

In a rare post-midnight courtroom battle, the Congress-JD(S) combine made a desperate legal push to stall the government formation.

Yeddyurappa has 15 days to prove his majority in the Assembly.

The Congress today termed Yeddyurappa’s oath as chief minister of Karnataka “farcical” and said the party’s “irrational insistence” on forming government in the southern state when it did not have the numbers made a mockery of the Constitution.