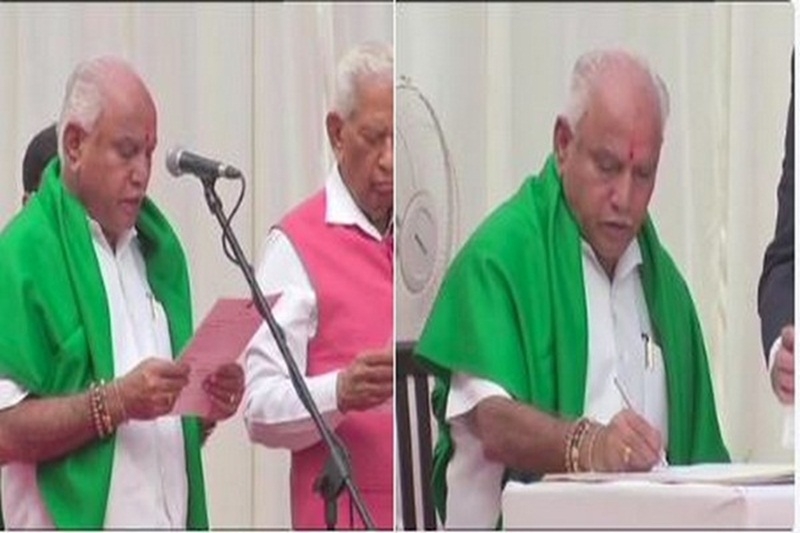 Bengaluru (Karnataka): The Bharatiya Janata Party’s B.S. Yeddyurappa on Thursday for the third time was sworn-in as the Chief Minister of Karnataka at the Raj Bhavan.

Yeddyurappa took oath as the 23rd chief minister of Karnataka after the Supreme Court early today morning decided not to put a stay on the swearing-in while conducting a post-midnight hearing, wherein Congress and JD(S) pleaded for the same citing BJP’s inadequate strength in the assembly to stake claim at forming the state government.

The three-judge bench of Justice A.K. Sikri, Justice Ashok Bhushan and Justice SA Bobde, however, did not dismiss the petition filed by the two parties and said: “This petition is a subject of hearing later on”. The next hearing will take place on later today at 10:30 am. Late last night, Congress and JD(S) challenged Karnataka Governor Vajubhai R. Vala’s decision in the top court to invite BJP to form the government even when the saffron party, with 105 MLAs, including one Independent MLA, is seven short of the halfway mark of 112.

They contended that they, with a total strength of 115 MLAs, are in a better position to form the government. Though Vala has invited the BJP to form the government, he has given 15 days to the saffron party to prove its majority in the state assembly. In the hearing, former Attorney General Mukul Rohatgi appeared for Bharatiya Janata Party (BJP), Additional Solicitor General (ASG) Tushar Mehta for the Union government, and Abhishek Manu Singhvi for the Congress-JD(S) alliance. The hearing commenced at 2.20 a.m. and concluded with the court passing order at 5.30 in the morning.