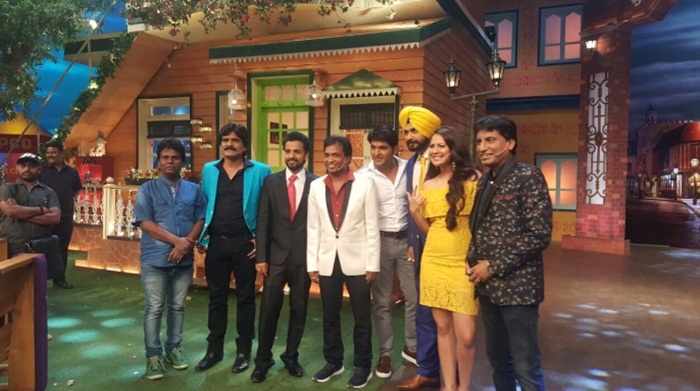 Mumbai: The controversy between Sunil Grover and Kapil Sharma is increasing day by day. Now the reports says that, Ali Asgar, Sunil Grover and Chandan Prabhakar have boycotted the show and still Kapil is not finding any replacement for the shoot. So the Wednesday the shoot was cancelled.

On Monday Naam Shabana team visited the show were Taapse Pannu and Manoj Bajpayee came to promote their upcoming films. On Tuesday the laughter king Raju Shrivastav, Sunil Pal and Ahsaan Quereshi were called on an emergency basis. The Raju Shrivatav posted a picture on social with captioned, on the kapil show…

According to latest reports and channel sources, “Raju just shot for an episode. He hasn’t signed the show. The situation right now is such that we are stuck. People are trying to convince him (Sunil). Kapil has been talking to him. People are discussing with each other what can be done about this.”

All the controversy was started on a flight when Kapil downed an entire bottle of Whisky, and misbehave with the team and hurled abuses at them. When the crew members started serving food to the team, kapil got upset and said, I’m still drinking and how can I start eating food. He started shouting and annoying other passengers aboard the plane. Kapil started using a bad words at Sunil and chandan and slapped Sunil on the flight, threw a shoe on Sunil said by passenger. When a crew said to calm down, he hurted them also.

Due to incident Kapil apologises to Sunil but Sunil gives reply on social media saying, first respect to human beign and refused to come the show. Along with him Ali Asgar and Chadan Prabhakar also now come for shoot. According to reports, Ali Asgar has quit the show, and now he is currently doing a shooting for Trideviyaan where he will be playing a criminal disguised as a woman.