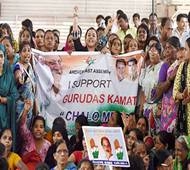 Mumbai : Gurudas Kamat supporters gather outside Congress party office demanding that their leader take back his resignation from the party, in Mumbai on Wednesday. PTI Photo by Shashank Parade (PTI6_8_2016_000039B) |

Kamat tells supporters not to stage demonstration or tender resignations

Mumbai: Sulking senior Congress leader Gurudas Kamat who had announced retirement from politics two days back, is likely to be pacified by the party high-command, MPCC chief Ashok Chavan indicated here on Wednesday.

“Gurudasji is a respectable leader and disciplined worker of the party. We are trying to contact him to pursue him for reversal of his decision of retirement from politics,” Chavan said and also added that Kamat is learnt to have gone to Delhi for a meeting with senior party leaders and the issue is expected to be resolved soon.

Meanwhile, Kamat loyalists staged demonstrations at the MRCC office at Azad Maidan. They shouted slogans against MRCC chief Sanjay Nirupam and appealed Kamat to reverse his decision. It was also said that 25 of the party corporators in Mumbai Corporation are ready to resign as a part of the built up. However, sources also revealed that Kamat appealed his sympathisers and supporters not to stage up any demonstration or tender resignations.

Another Congress MLA from city Krishna Hegde had alleged highhandedness in appointments of bloc Congress presidents and demanded that all such appointments be cancelled.

“City Congress president Sanjay Nirupam is handling the party in Shiv Sena style. He needs to change his style of functioning,” another party leader remarked on condition of anonymity.

The city Congress unit is now divided in four groups. Former MPs MilindDeora, PriyaDutt and Kamat represent three groups, which are being sidelined by party president Sanjay Nirupam’s group, another party worker said. All the other groups want Nirupam’s ouster, he added.