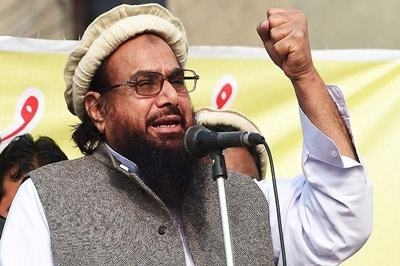 Saeed inaugurated several offices in Lahore and canvassed for the candidates of Milli Muslim League (MML) contesting the elections, scheduled for July 25.

On his arrival at Iqbal Town in a huge caravan comprising motorcycles, jeeps and trucks, he received a rousing welcome and people showered rose petals on him.

While Sharif and daughter, Maryam, have been sent to jail on corruption charges, a designated terrorist, Hafiz Mohammed Saeed, is not only free but actively seeks votes for the polls, targeting India and the US.

Saeed’s son, son-in-law and 13 women are among 265 JuD candidates contesting on Allaha-u-Akbar Tehreek (AAT) platform on national and provincial assemblies seats across Pakistan. Saeed, carries a bounty of US $10 million for his role in terror activities, is himself not contesting the election.

Addressing his supporters, Saeed praised the audience for their support to MML. He said, “MML will make Pakistan country of Allama Iqbal and Quaid-e-Azam Mohd Ali Jinnah. This black chapter will be coming to an end now and world will see new enlightened chapter.”

Other senior leaders of JuD also addressed the meetings. Mohammad Yaqub Sheikh, candidate of NA-125 stated Saeed fielded MML candidates for revival of the ideology of Pakistan, service to humanity, freedom of Kashmir and the challenges being faced by Pakistan.