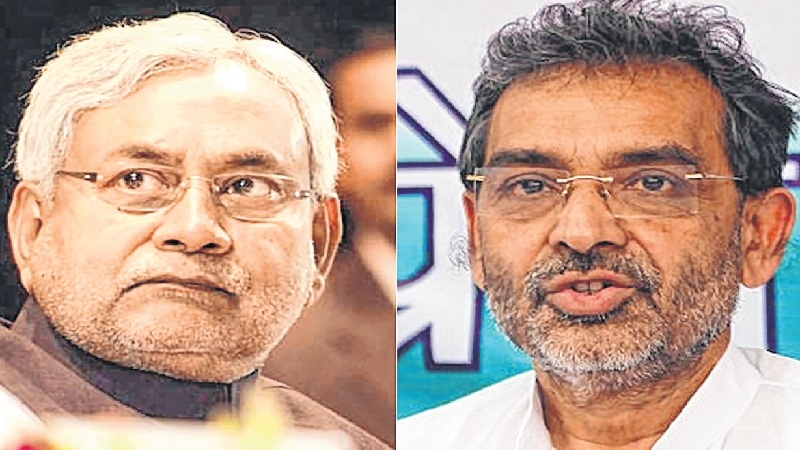 Patna: The Janata Dal (United) said on Thursday that Nitish Kumar was the chief minister by popular choice and he shall continue to be in office till the time people of Bihar wanted him as their leader. The JD(U) was reacting to a claim by Union minister and Rashtriya Lok Samata Party (RLSP) chief Upendra Kushwaha on Wednesday that during a personal conversation with him, the chief minister had expressed his reluctance to run for another term after his ongoing tenure ends in 2020.

“We do not have to say anything about the veracity of Kushwaha’s claim. What we wish to underscore is that Nitish Kumar became the chief minister not out of his own personal desire but because the people of Bihar wanted to see him in that role. And they have been reaffirming their faith in his leadership by voting him back to power,” JD(U) national general secretary Shyam Rajak said, reports PTI.

Rajak, who is the party’s deputy leader in the state assembly, also took a swipe at Kushwaha who had been critical of Kumar for some time but has started calling him a “big brother” of late. “It is true that Kumar and Kushwaha have been like brothers. I hope that the RLSP chief remains true to the sentiment and cooperates with Kumar,” Rajak said.

A former JD(U) leader, Kushwaha had quit the party and floated his own outfit in 2013. His party comprises, largely, disgruntled elements from within the JD(U) and some of them such as RLSP working president Nagamani have been quite vocal against Kumar, even demanding that Kushwaha be made the chief ministerial candidate in the next assembly polls.