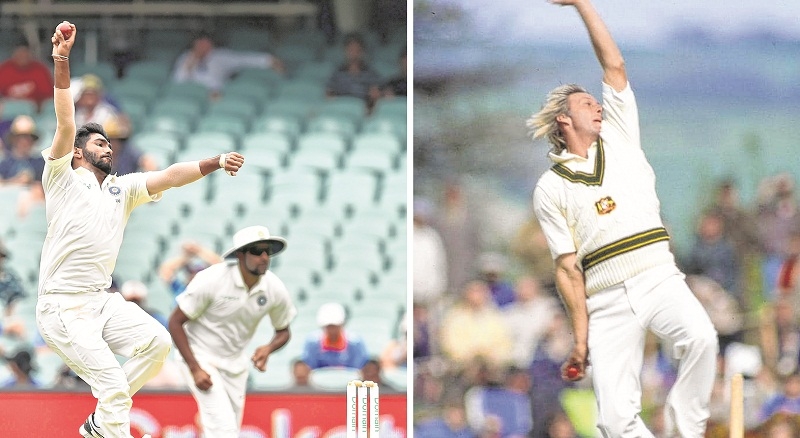 India's bowler Jasprit Bumrah bowls during day two of the first Test cricket match between Australia and India at the Adelaide Oval on December 7, 2018. (Photo by PETER PARKS / AFP) / -- IMAGE RESTRICTED TO EDITORIAL USE - STRICTLY NO COMMERCIAL USE -- |

Kolkata: Lauding Jasprit Bumrah for his exploits Down Under, legendary Australian fast bowler Dennis Lillee compared him with Jeff Thomson, saying the India pacer is ‘outside the guidelines of normal fast bowling’. “I think Jasprit Bumrah is very very interesting. He runs off a very short run-up.

“He jogs and then bowls with a very short run. He has got straight arms. His bowling is not text book by any means, but it works. He is very different from other pace bowlers, which reminds me of another fast bowler of my era, who was very different from everyone else – Jeff Thomson.

“He is not as fast as Jeff Thomson was but similar in the sense that they were outside the guidelines of normal fast bowling action or technique,” Lillee told Ananda Bazar Patrika in an interview. Bumrah is the highest wicket-taker for India after the first two Tests with 11 scalps to his name.

“They are so well equipped in the pace bowling department now that if they have to pick four, they can pick four. And whatever little I have seen of them, they are very very good Test bowlers. I am pretty impressed with the way they bowled in the first two Test matches in Australia. They could have had a bit more luck, I guess.”

Lillee picked the Australian quicks ahead of Indians, adding that Nathan Lyon’s addition helps with the workload. “I think both the teams have got very good pace attacks. But, in my opinion, Australia’s pace attack, on the day and on song, are the better one.

“And they are lucky enough to have a very good off-spinner who backs them up, keeps the pressure on, bowls lot of overs. That helps too.  “In fact, India have a top spinning option in Ashwin too and I am sure the Test that is coming up in Melbourne will see each side having three good fast bowlers and a quality spinner. That will be excellent to watch, I am looking forward to it.”
On Virat Kohli, Lillee said the Indian captain is as good as anyone he has seen.

“I think he is a great player, There is no need for me to even say because everyone knows that. What makes Virat great is first of all great technique, determination, balance and the time he has got to play the deliveries. He seems to see the ball early and all great batsmen have those four things. Technique, determination, balance and the ability to see the ball early. Virat is as good as anyone I have seen.”Considered by many to have been “the complete bowler”, Lillee said West Indies great Vivian Richards was the greatest batsman he ever bowled to.