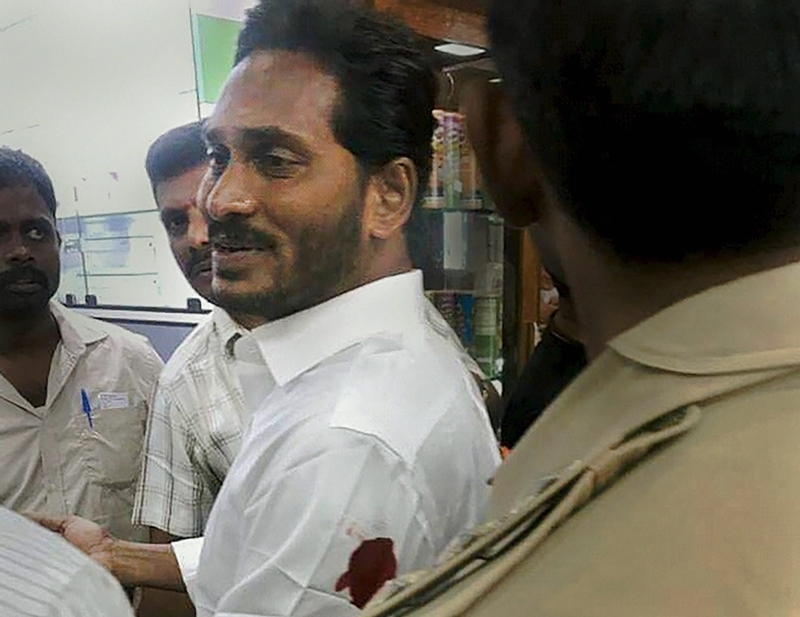 YSR Congress Party Chief Jagan Mohan Reddy after he was stabbed on his arm by an unidentified assailant at Visakhapatnam Airport. PTI Photo |

Hyderabad: YSR Congress chief YS Jagan Mohan Reddy has approached the Hyderabad High Court seeking a direction to the Andhra Pradesh government to transfer the probe into the recent attack on him at the Visakhapatnam airport, to an independent agency.

Andhra Pradesh Home Secretary, DGP and Chief Minister N Chandrababu Naidu were among those who were made respondents in the plea, the petitioner’s counsel said Thursday. On October 25, Reddy was injured on the left shoulder when he was attacked by a man with a small knife, at the airport in Visakhapatnam. The assailant, J Srinivas was employed at the airport canteen, police had said.

Jagan, the Leader of Opposition in the Andhra Pradesh Assembly, submitted that he has no confidence in the investigation being conducted by the state government and added that it ought to be conducted by an independent and impartial agency which is not under the government.

Alleging that the attack on him was part of a “criminal conspiracy” to eliminate him, Jagan said it indicated a clear effort to “dilute” the investigation and “divert” it in a wrong direction. Justice A V Sesha Sai has posted the matter to next week.