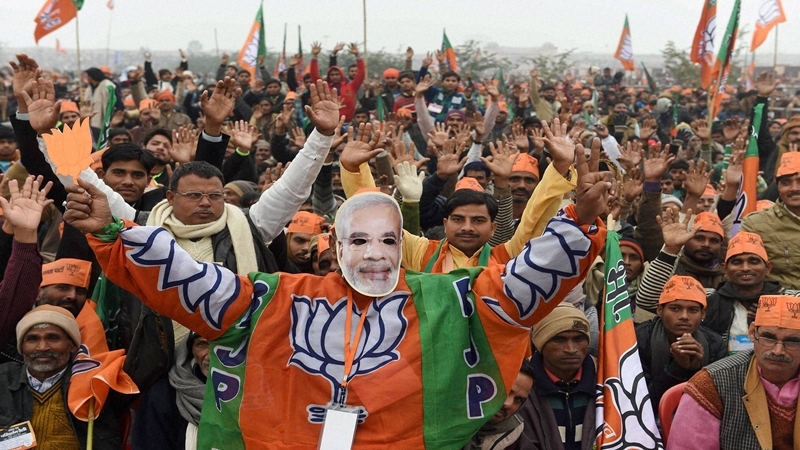 Bengaluru: As the results of various exit polls showed the saffron party doing well in Uttar Pradesh, Uttarakhand, Goa and Manipur, the Bharatiya Janata Party (BJP) on Saturday said the ‘Modi magic’ will once again bring the four state governments back to the party once again.

Expressing confidence of a splendid show in the assembly polls, BJP leader S. Prakash told ANI that the ‘Modi wave’ will be again seen in a form of Tsunami this time.

“As predicted by the exit polls BJP will sweep the five states assembly polls results. Especially, Uttar Pradesh, Uttarakhand, Manipur and Goa BJP will be forming the government on its own. The Modi wave will be again seen in Tsunami form in a few minutes from now. Modi magic will bring four state governments back to BJP once again,” he added.

Also Read : Exit polls say the saffron party BJP leading in 3 out of the 5 states, including UP

With the exit polls showing the BJP leading in the assembly elections, Samajwadi Party (SP) leader Ramgopal Yadav earlier termed the prediction being changed under pressure.

“These exit polls are nonsensical. I have information that the original exit polls were changed under pressure by channels few days back,” Ram Gopal Yadav told ANI.

Reacting to the results of exit polls for the elections to five state Assemblies, Congress leader Digvijaya Singh said the exit polls and polls surveys are all ‘bogus’ as they are conducted to improve Television Rating Point (TRP).

“Exit polls, polls surveys they are all false. And all these frauds are conducted to improve their TRPs therefore I don’t subscribe to any of these surveys. I never paid attention to them and neither will I give them attention. Wait till the results are out only then I can say,” Singh told ANI.

Read More : Assembly polls: All eyes on crucial vote counting today, counting to being at 8 am

Pollsters have predicted the BJP as the largest party in Uttar Pradesh, Uttarakhand, Goa and Manipur while a setback for SAD- BJP alliance in Punjab.

The counting will start at 8 in the morning and firstly, all the postal ballots will be counted.

The Election Commission (EC) has issued guidelines on security arrangements for counting of votes, and has also set up facilities for disseminating trends and results of elections of five assemblies.