It is an interaction, not conflict with leopards: SGNP 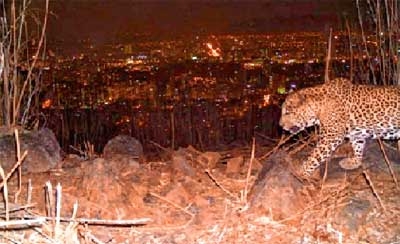 Mumbai : Efforts have been taken to change the approach towards man and animal conflict and bring about a transformation in Mumbai’s forests by the Sanjay Gandhi National Park (SGNP) authorities and volunteers.

Mumbaikars for SGNP have initiated various programmes and workshops to promote the idea of ‘Conflict should be seen as an interaction’ and create awareness about the same.

Around 35 leopards exist in this National Park at Borivali which has over 20,000 people per square km living within the periphery of the park. With such a close proximation, the interaction of leopards with the humans residing in the nearby areas is inevitable, as per the SGNP officials. As the interactions cannot be prevented, the approach towards it should be changed and no harm should be caused to either the human or the wild animal.

Anwar Ahmed, director of the SGNP, said, “The National Park has boundaries but the leopard does not have its specific boundaries. The animal has a certain behavioural pattern, therefore the harm can be reduced if people are well educated on how to deal with the situation when they spot a leopard. Various voluntary projects have helped to reduce the conflicts over the last few years.”

As per the survey report of SGNP, there have been no leopard attacks on humans after 2013. There have never been cases of attacks on the vast population who reside inside the park in different padas. Dipti Humraskar, a volunteer said, “Those who live inside the park are used to this kind of scenario where they often spot the wild cat. But those who live in residential complexes around the park need to also learn and accept that they are living quite close to the park and thus spotting the wild animal in their vicinity is a normal affair.”

Living with Leopards, a programme to change the perspective and approach of citizens towards man and animal conflict was initiated in 2011. “As part of this project we conduct workshops in various housing societies and residential complexes to educate them on how to handle such instances. You do not harm the animal and the animal will not harm you is the basic approach that one should have,” added another volunteer.