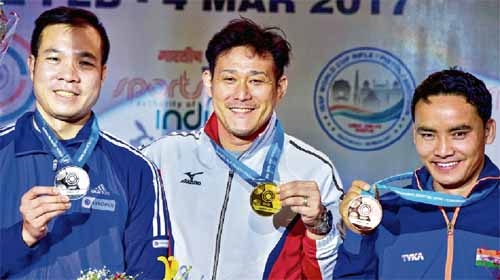 The 29-year-old Rai shot at total of 216.7 in the eight-men final to finish third on the podium.

However, Chain Singh could not swell the host country’s tally after finishing seventh in the final of men’s 50 rifle prone. Singh shot 141.9.

The Asian Games and World Championship silver medallist was languishing at seventh position after the end of the first competition series that included an 8.8, but clawed his way back with two 10.6 and a 10 in the second competition series. At the end of that series, Rai was placed sixth with a total of 98.7 at the Dr Karni Singh Shooting Range.

He managed to maintain the status quo even as the final entered the elimination stage. He shot two 10s in the following shots to continue his gradual ascent.

The army man roared back into contention with a couple of 10.6 and ensured a bronze with a 9.9, finishing ahead of China’s Zhanyi Xu (197.9). With a lead of 0.1 point over Vietnam’s Xuang Vinh Hoang, Rai was in the hunt for a silver but an 8.6 meant he had to be contend with the bronze.

“I was down in the beginning, it went very badly. I had doubts if I would be able to win. But I had made up my mind to give my best and fight till the end and I fought till the end. One by one I climbed up the ladder,” Rai said after his win.

He said the few bad shots initially, in a way, had a positive impact on him as they helped “ease the pressure”.

“I don’t think much about the scoreboard as they can affect my mind. I was only focused on the job at hand, what I need to do. I was not thinking about qualifying for the final. After I had two-three bad shots, the pressure had eased too. Like you get to learn from your mistakes, I also learnt from my initial mistakes. The pressure just eased after that and it was good for me,” he said.

“This is my third international medal after the Olympics. Won a silver medal in the World Cup final and was crowned the champion of champions. Had a gold in another World Cup prior to that.”

The gold went to Japan’s Tomoyuki Matsuda with a world record total of 240.1 points, while Vietnam’s Xuan Vinh Hoang claimed silver with 236.6 points.

The other Indian shooters in the fray in the air pistol event — Omkar Singh and Amanpret Singh — failed to cross the qualification stage finishing 14th and 19th, respectively.–PTI