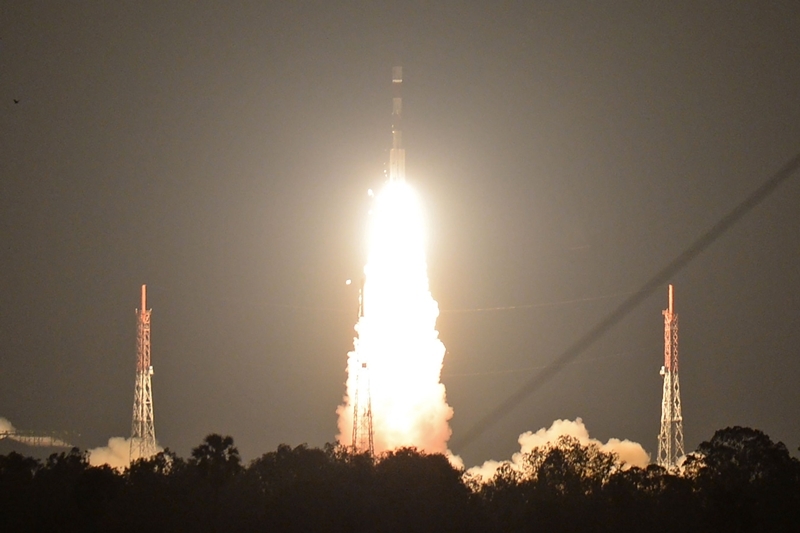 The Indian Space Research Organisation's (ISRO) navigation satellite IRNSS-1I, on board the Polar Satellite Launch Vehicle (PSLV-C41), lifts off at the Satish Dawan Space Centre in Sriharikota in the state of Andhra Pradesh on April 12, 2018. / AFP PHOTO / ARUN SANKAR |

Sriharikota (AP): The Indian Space Research Organisation’s navigation satellite INRSS-1I was today launched by PSLV-C41 from the spaceport here and successfully placed in the designated orbit.

PSLV-C41/IRNSS-1I Mission blasted off at 4.04 am from the first launchpad at the Sathish Dhawan Space Centre. It was a normal lift-off, ISRO officials said. The workhorse, PSLV, injected the satellite into orbit 19 minutes after lift-off from the Sathish Dhawan Space Centre here. ISRO Chairman K Sivan described the mission as a success and congratulated the scientists behind it. He said IRNSS-1I was successfully placed in the designated orbit.

IRNSS-1I is expected to replace IRNSS-1A, the first of the seven navigation satellites, that was rendered ineffective after its three rubidium atomic clocks failed. The seven satellites are part of the NavIC navigation satellite constellation. The launch is ISRO’s second attempt at sending a replacement satellite. The previous mission of a PSLV carrying IRNSS-1H in August last year failed after the heat shield covering the satellite failed to separate. The IRNSS-1I mission takes place two weeks after the space agency launched GSAT-6A on board GSLV Mk-II. Though the rocket placed GSAT-6A in orbit, the ISRO lost communication with the satellite within two days.