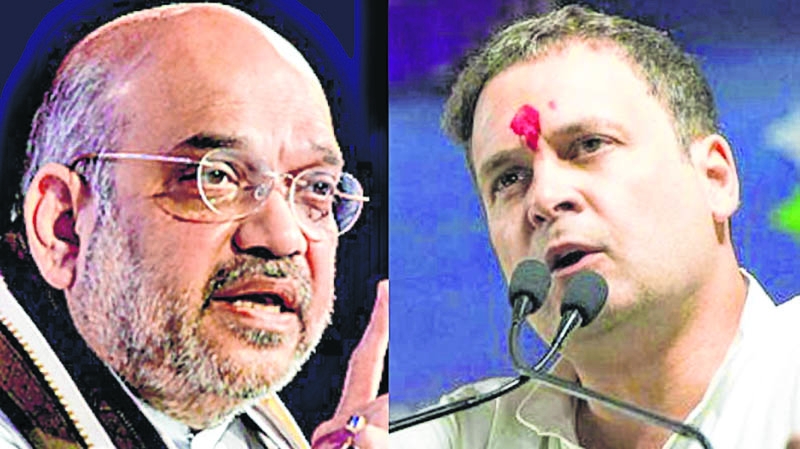 New Delhi : Elated over the Supreme Court upholding arrest of the human right activists in the Bhima Koregaon violence, BJP President Amit Shah asked Rahul Gandhi to clarify whether the Congress is with these “urban Naxals” and “infiltrators” or it is also concerned about the countrymen.

The term “urban Naxals” has been coined by Union Finance Minister Arun Jaitley to depict those leftists who do not indulge in violence in jungles but provide moral and financial support while remaining overground as professors, lawyers and journalists.

Shah asserted at a Press conference here that “Rahul has perhaps lost his mental imbalance as at times he stands with the illegal migrants in Assam on the NRC issue, with those raising anti-national slogans in Jawaharlal Nehru University (JNU) or with the urban Naxals conspiring to kill Prime Minister Modi.”

Shah regretted that instead of praising the great valour of the Jawans in the surgical strikes, Rahul calls it “Khun ki dalali” while UPA chairperson Sonia Gandhi sheds tears on the killings of the terrorists.

He asserted that it has become a habit of the Congress to defame those continuously working for the nation honestly and that is the Congress of Rahul Gandhi. Those who politicised the national security for apeasement will be never pardoned by the country, he added.

“Those who stooped down to the level of politicising an issue of national security have been exposed by the Supreme Court’s decision today. It is high time that the Congress now clears its stand on this critical issue of Urban Naxalism,” Shah said in a series of tweets.

Shah also slammed Congress President Rahul Gandhi saying that there is only one place of idiocy and it is Congress.

“There is only one place for idiocy and it’s called the Congress. Support ‘Bharat Ke Tukde Tukde Gang’, Maoists, fake activists, and corrupt elements. Defame all those who are honest and working. Welcome to Rahul Gandhi’s Congress,” Shah said replying to Gandhi’s tweet of August 28.

Gandhi had accused the RSS of shutting down NGOs, jailing all activists and shooting those that complain, after the Pune Police arrested five people in connection with the Elgaar Parishad event in Pune last December.