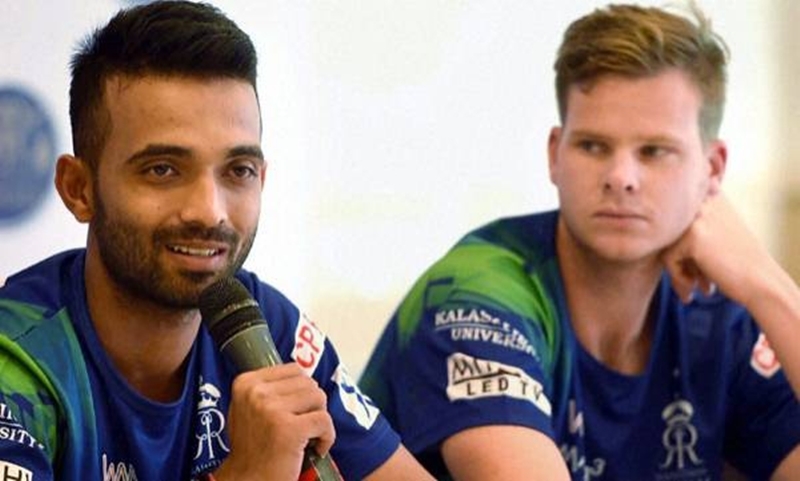 New Delhi: Australian skipper Steve Smith today stepped down as captain of Rajasthan Royals in the wake of severe backlash he has faced after admitting to ball tampering during the third Test against South Africa.

India’s Test vice-captain Ajinkya Rahane will now lead the franchise in the upcoming 11th edition of Indian Premier League as Cricket Australia is mulling harsher punishment despite a one-Test ban by the ICC. The decision was on the expected lines the moment Cricket Australia indicated that harsher penalty was on cards for Smith and Co for their role in an episode that has shaken Australian sporting fraternity.

“Steve believes given the current circumstances It’s in the best interest of the Rajasthan Royals that he steps down as Captain so the team can get ready for the start of the IPL without the ongoing distractions.’ He would like to extend his gratitude to the BCCI officials and all the fans in India for their constant support,” Rajasthan Royals’ head of cricket Zubin Bharucha was quoted as saying in a media release.

“The incident in Cape Town has certainly disturbed the cricketing world. We have been in constant touch with the BCCI and taken their counsel. Furthermore, we have been in regular contact with Steve,” he added. Royals’ mentor and former skipper Shane Warne was in Cape Town and it is understood that Warne must have also had a chat with the Australian captain.

About Rahane, who has been a stellar performer for Royals before their two-year ban, Bharucha said: “Ajinkya Rahane has been an integral part of the Royals family for a long time now and he understands the culture and values of our team. We have absolutely no doubt that he will be a great leader of the Rajasthan Royals.” Co-owner Manoj Badale said: “Rajasthan Royals will do everything possible to protect the values and the integrity of the game. We agree with Steve’s decision to step down as captain, and we are fortunate to have such a capable successor with Ajinkya Rahane. It is important that all cricket fans retain a balanced perspective on the situation.

“What happened in South Africa was clearly wrong, especially given that it appears to have been pre-meditated. That said, this will be a difficult time for Steve as well, given how much he cares about the game,” said Manoj Badale, the co-owner of Rajasthan Royals.

Rajasthan Royals will launch their season with an away fixture against Sunrisers Hyderabad on April 9th followed by their first home game in Jaipur on April 11 against the Delhi Daredevils at Sawai Mansingh stadium.

Ranjit Barthakur, Executive Chairman, Rajasthan Royals, said, “Ajinkya Rahane has stepped up as a leader whenever he has been given the opportunity, be it for Team India or at Rajasthan Royals. We consider him the right candidate to lead the side this crucial season when the team is coming back to the IPL after two years. We wish him all the best.”