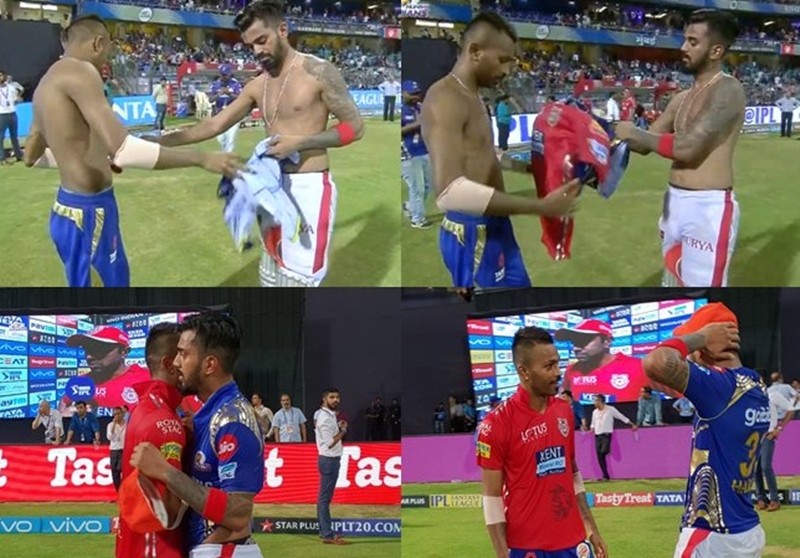 India’s cash-rich tournament, the Indian Premier League is getting close to its business with only two places remaining for the playoffs. And the game to secure the berth is heating up which is what we saw in Wednesday’s match between Mumbai Indians (MI) and Kings XI Punjab (KXIP) at Wankhede. After a good run-chase, Mumbai defeated Punjab by just 3 runs. However, what happened later stole the limelight. Indian cricketers, KL Rahul and Hardik Pandya playing for Kings XI Punjab and Mumbai Indians, respectively, were spotted exchanging their jerseys as a mark of the spirit of the game.

Revealing the reason of swapping jerseys with Pandya, Rahul, who hit a blistering 94 off 60 balls against Mumbai Indians, said: “We’ve seen this happening a lot in football. Obviously, Hardik and I are good friends. I felt it would be nice to collect some jerseys and bring that tradition in cricket.

“We didn’t speak about this earlier. As we were talking, I said ‘give me your jersey’. He wanted my jersey too. So we exchanged it. It’s a nice, nice thing,” Rahul said during a video interview with iplt20.com.

Talking about the match, it looked like a clinical show on cards for KXIP with Rahul and Finch in complete control against the Mumbai bowlers. However, Bumrah once again showed why he is considered as one of the best in the business when it comes to bowling in the death. He dismissed Rahul for 94 in the 19th over. With this win, Mumbai Indians have moved to fourth position on the points table. Bumrah returned with brilliant figures of 3 for 15 in his allotted 4 overs. Meanwhile, a similar moment had occurred in the FIFA World Cup, as this is a common tradition observed in the world of football.