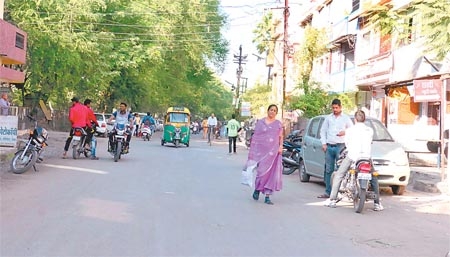 Indore: Rambagh under Sadar Bazaar police jurisdiction had its share of loot, thefts, fraud by fake police and chain snatchings. However, residents said that due to increased police patrolling in the area, such incidents have become a thing of the past but added that still women feel unsafe while moving alone. Incidents are sporadic now but there needs to be more police involvement as most cases remain unsolved.

Traders said that TI Mahendra Singh Bhadoria is very strict and due to his strictness anti-social elements fled the area. Bhadoria questions suspects closely and if he suspects any foul play he hauls them to the police station.

Jitendra Thakur, a resident, said that there have been a number of chain snatchings in both Rambagh and Tilakpath and so far police have not made any arrests in respect of these incidents.

Kruti Vyas, another resident, said that there have been no incidents in last six months but the fear still lingers on despite police patrolling. People have to be careful while walking on the road and be alert to any suspicious movements.

Nirmala Upadhaya, a housewife, said that although there have been no thefts people still are afraid to leave their homes unguarded and have to ask their neighbours to keep any eye on the house while being away.

Lokesh Garg, a businessman, said that so far there is peace in the colony due to police patrolling and also due to police establishing communication with the residents positively.

A chain snatching incident occurred sometime ago but with the advent of TI Bhadoria and his strictness no such incident has occurred in the area in the recent past.

Police are now more public friendly and this has instilled confidence among people. There have been no incidents reported for some time now due to increased police patrolling.

One of my women relatives was robbed some time ago and though there have been no incidents now women still feel unsafe.

TI is strict and patrols the area himself. He has asked his staff also to be alert and watchful to undesired persons.

There have been loots and robberies in the colony including a chain snatching from a woman acquaintance and the fear still lingers in the minds of the residents.

There was a theft 20 days ago in the colony but due to police patrolling anti-social elements are hardly seen in the area.