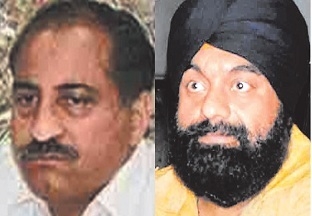 Tightening the noose around money launderers, Enforcement Directorate (ED) on Monday took possession of insurance policies worth Rs 9 crore of sacked IAS couple Arvind Joshi and Tinu Joshi. The insurance policies are of ICICI Prudential. The policies will remain under possession of ED Indore sub-zonal office.  In another case, ED got possession of 3.7-acre land of Ranbir Singh Chhabra alias Bobby Chhabra, the alleged perpetrator of several land scams in the city.

Arvind Joshi and Tinu Joshi were IAS officials of 1979 batch. The income tax department conducted search at their premises at 74 Bungalow, Dayanand Nagar in Bhopal on February 4, 2010. Subsequently, the IAS couple was suspended in February 2010 when Arvind Joshi was principal secretary (jail) while Tinu Joshi was principal secretary of women and child development department. In March 2010, Lokayukta also raided their same premises and found assets disproportionate to their known sources of income.

In 2011, ED registered a case under provisions of Prevention of Money Laundering Act, 2002, and initiated the investigation. Following a look out notice, Arvind Joshi surrendered before court in Bhopal on September 16, 2015, and was sent to jail. Tinu was sent to jail in February 2015. On July 4, ED filed charge sheet against Arvind and Tinu Joshi and six others at PMLA court in Bhopal.