Indore: Now, city set to claim either 5 or 7-star ranking

Country’s cleanest city, Indore is all set to stake its claim directly either on five or seven-star on the rating portal launched under Swachh Survekshan-2018.  “We had previously staked claim on three-star rating but delay in launch of MIS portal by Ministry of Housing and Urban Development (MoHUD) forced it to relax the rating protocol. Now, cities are allowed to stake claim on any rating they think they deserve,” said Asad Warsi, consultant on municipal solid waste to Indore Municipal Corporation (IMC).

He, however, said that the cities, however, would have to undergo a third party inspection on the claims it is making for the star ratings. “You need to fulfil the criteria for the rating protocol,” he said. The IMC thinks that it is prepared enough to go for seven-star rating which is top rating but it would decide about the same in a meeting shortly. The IMC may also decide to initially go for five-star rating and later stake claim on seven-star.

As per previous rules of the protocol, cities would be assessed and accordingly be awarded one, two, three, four, five and seven-stars. As per the system, the city would have to declare itself what star rating it deserves and then invite central team for verification. If the team in its assessment will find its claims true, the city will get the certificate. 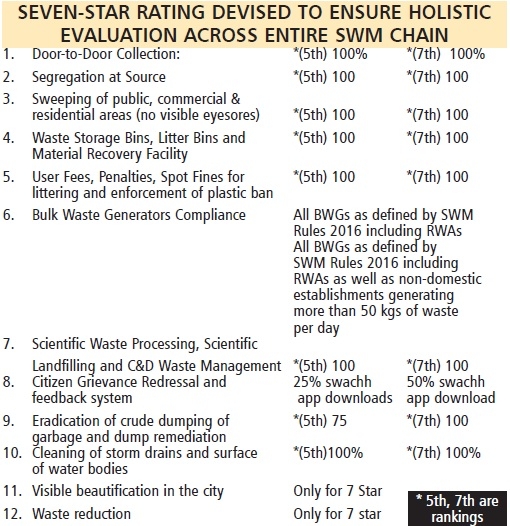 For one, two and four stars, the state government has right to give away certificates and for three, five and seven stars, the MoHUD would send teams, which inspect cities and on their recommendation stars are granted. On August 24, the IMC had declared Indore as three star city and invited central team for assessment. But the delay in launch of MIS forced the ministry to relax the protocol.