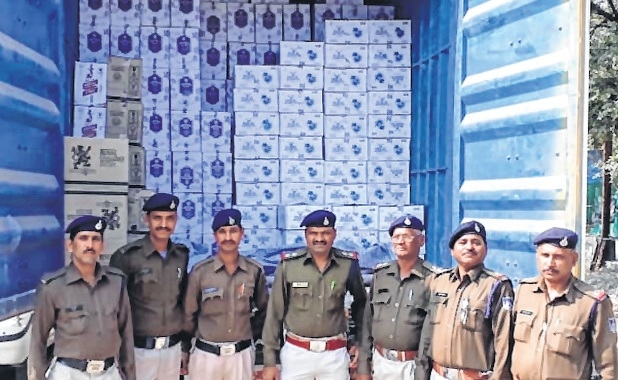 Illegal liquor worth over Rs 1.45 crore was seized by the police from a Rajasthan-based container truck on Bypass on Thursday night. The truck driver, who was repairing the truck, managed to flee. Police registered a case against unidentified persons and launched a search for the accused.

According to Additional Superintendent of Police Shailendra Singh Chouhan, a tip-off was received that a truck is parked on the service lane, Bypass Road near Labhganga Garden, and it was carrying some illegal stuff. An alert police team from Khajrana reached the spot.

The cops seized 1252 boxes of different brands of liquor which were being ferried illegally. Police could not trace the driver and the owner of the consignment till late night. It is said that the truck hailed from Alwar in Rajasthan and the truck owner is Dinesh Kumar Yadav of Shahpura area in Rajasthan.

The truck owner’s role is also being probed. He is being contacted by the police to know about the consignment and about the truck driver. Sources claimed that the truck was coming city via Ratlam route and the police of Sadalpur near Lebad also tried to intercept the vehicle. It is believed that the truck got off the Bypass to the service road following glitches.