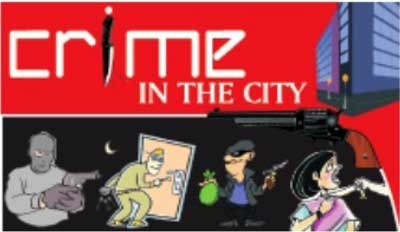 Indore: A girl was abducted when she was going with her mother by a person near Jinsi Square on Saturday.  According to police, the complainant Sheetal Jaiswal alleged that she was going to Rajwada with her daughter Ayushi when the accused Suraj Verma, a resident of Jinsi stopped them and abducted Ayushi on his bike. The complainant attempted to stop the accused but he managed to flee. Police have registered a case against the accused and have started their search for the girl.

In another incident, some unidentified persons abducted 10-year-old Gaurav in village Alwasa.  Banganga police suspect that the accused lured the victim and then abducted him. Police have registered a case in the incident.

Thieves dupe a trader by impersonating as municipal corporation officers in Banganga area on Saturday. According to the reports, the victim Prakash Tamarkar alleged that he owns a shop at Banganga main road and had kept some goods outside the shop. An on-duty Daroga warned Prakash to keep his goods inside after which he shifted some items back in the shop. Later some unidentified persons impersonating as municipal corporation staff approached in a jeep with hooter and seized his goods kept outside. The victim tried to stop them but they fled along with the goods. Prakash later reached the zonal office of corporation to get details of his goods but the staff denied of any action taken in the area. The staff at the office suggested checking with corporations Removal Team and after enquiring at the municipal corporation head office that fake municipal officers duped him. The police are investigating the incidence.

An elderly man was found dead under mysterious circumstances in Badgonda area on Saturday. According to police, the deceased has been identified as Gopal, a resident of Manpur was found dead in the area by the local residents who informed the police. The face of the deceased was crushed by a stone so that he could not be identified, the police said. The local residents helped to identify the deceased and reported that he left for some work at night and did not return home. Preliminary investigation revealed that the elderly was having a dispute with some persons of the area and police suspects their involvement in his death. The police suspects that the accused brought the victim out for some work and then killed him after making him consume liquor. The police are questioning the suspects and have started their investigation. In another incident, a 35-year-old died while undergoing treatment at MY Hospital on Sunday morning. The deceased Shyam, a resident of Shyamcharan Shukla fell from the third floor and was severely injured two days back. The family members had rushed him to hospital for treatment. The police have registered a case and are investigating the incidence.

A garage caught fire near Rasoma Square under Vijaynagar police station jurisdiction area on late Saturday night. No casualties were reported. According to police fire brigade, a garage in the area caught fire and the local residents informed about the incidence. The fire brigade team used one tanker of water to extinguish the fire and managed to control the spread in nearby shops. A welding machine, cutter machine and other valuables were burnt in the fire. The police have registered a case and have started their investigation to find the exact cause of fire.