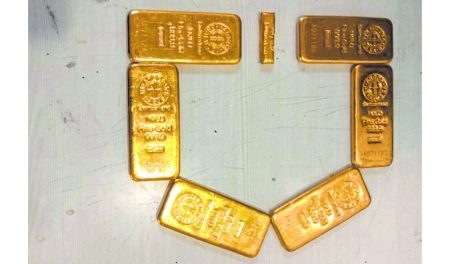 The DRI seizure of 6kg gold and the arrest of two smugglers from the city airport on Wednesday is no less than a pot-boiler Bollywood flick of yesteryears which used to feature Dons and their molls smuggling anything from gold to charas. This seizure which took place on Wednesday may be just the tip of an iceberg. Wait for the reams of probe matter to come!

Following the seizure, a case of fake Aadhaar cards and human trafficking have also come to light where 2 minor girls were accompanied by the smugglers. Based on a specific intelligence, the four passengers travelling on Air India flight No. AI-635 arrived at 8:10 AM from Mumbai to the city carrying smuggled Dubai marked gold bars in hand baggage and were intercepted by DRI officers.

During the operation, the officers recovered 12 pieces of foreign marked gold cut bars, weighing 6 kg valued at Rs.1,96, 14,355/- which was cleverly concealed inside in the ladies’ handbags and covered by a translucent tape. DRI officials seized the gold bars on the belief that the same were attempted to be smuggled into the country in contravention to the provisions of the Indian Customs Act 1962.

The blue print
Explaining the modus operandi to FREE PRESS, officials said, the gold was brought in from Dubai in the same aircraft . The route was Dubai-Mumbai. The passenger at Dubai took the flight and plastered the consignment under the seat and flew into Mumbai and then went off from the airport. The peddlars booked the Mumbai –Indore flight of the same Air India flight which now operated as a domestic one.

These peddlars had information of the seat number and requested for the same while procuring the boarding passes. While in transit, they plucked out the consignment and kept the same in their handbags and hid it in translucent tapes. Being a domestic flight, there was no question of frisking or further checks. But they stumbled upon ill luck when the DRI officers, acting on a tip off, intercepted them and seized the consignment.

Sources said the arrested accused were Mohmmad Menaaz alias Jitendra Singh and Aparna Malhotra alias Anita Sehgal. They were arrested under Sections 457, 470, 471, (forged documents) 135 (Customs Act) and 370 (Human Trafficking).
Two minor girls hailing from New Delhi aged 17 years had accompanied them. They were later handed over to their parents.

Fake Aadhar card
Fake Aadhhar cards were used by the arrested accused. While Aparna Malhotra travelled on this name which was mentioned in her passport, her Aadhaar card mentioned her as Anita Sehgal. Similarly, Mohmmad Menaaz’s passport had this name on his passport, but in the Aadhaar card, Menaaz was mentioned as Jitendra Singh!

Human Trafficking case
In the gold seizure case, the human trafficking angle also stared wide at the authorities. Mohmmad and Aparna stated that the minor girls were brought to Indore for sight-seeing. These little girls weren’t aware of the smuggling job. Therefore, Section 370 of Human Trafficking of IPC has been slapped on the arrested accused. However, on Thursday, both the minor girls were handed over to their parents, who were specially flown in from New Delhi.

Accused in DRI remand
After arresting accused Mohammad and Aparna, DRI officials produced them in the court of Special Magistrate (Economic Offence) Nidhi Modita Pinto. Special Prosecutor of DRI Chandan Airen submitted that this case is unique in several aspects, thus the accused must be handed over for DRI remand. The court okayed the same. They will remain in DRI remand till October 27, Saturday.