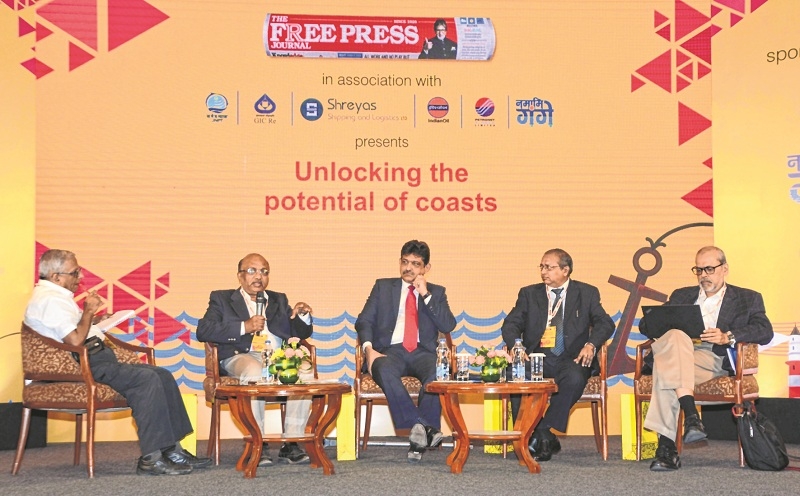 There is more to the growth story of ports. Crucial are the linkages to the hinterland, and ways to make coasts vibrant. It is these linkages that help unlock the wealth in the hinterland, and bring economic benefit to both ports and the country. In the second panel discussion ‘Unlocking the potential of coasts’, these linkages (like ships and railway) were discussed in-depth. Names (in alphabetic order) like Anoop Kumar Agrawal, MD, IPRCL; Anil Devli, CEO, Indian National Shipowners’ Association; Sanjay Gupta, SVP (Shipping), Petronet LNG Limited; and Anoop Kumar Sharma, CMD, SCI shared their views on the issues that their respective spaces were concerned about.

Anoop Agrawal, MD, Indian Port Rail Corporation: IPRCL was formed three years ago with the specific objective of catalysing internal and mainland port connectivity (most of which happens to be by rail). We have completed eight projects, with work going on in 20 projects and another 10 projects are at the DPR/ bidding stage.

Our company is right now doing modernisation of railway infrastructure inside ports at around 100 locations. The length of such railway is around 1,000 km wherein average is 70-80 km. At present, our plan is to first modernise the existing rails to minimise derailment chances, which have severe cascading effects. Second, we deeply needed to save time of locomotive changes.Beyond the routine, we are taking up two major rail projects – Indore-Manmad railway project which will connect to JNPT and second is the Jaisalmer link to Kandla Port.

Anoop Sharma, CMD, Shipping Corporation of India: SCI is the nation’s flagship cargo ship owner and charterer. We are well-diversified across segments like container, crude, bulk, offshore and gas (both LPG and LNG). While our mandate and well-spread presence has a strategic element, our freights are market-drive and there is no reservation of government cargo. We only have the Right Of First Refusal (ROFR) which applies to all Indian-owned ships.

Sanjay Gupta, SVP (Shipping), Petronet LNG: We are the largest LNG importer and our strategic purpose is to facilitate the demand of LNG in India. In line with increasing LNG acceptance in the economy, we have seen operational growth. Our first two ships were chartered in 2004 and 2005, and in the third and fourth (2009 onwards), we have created an equity stake of 3 per cent and 26 per cent for ourselves.

Sourcing points are Qatar, which is seeing a declining share and Australia, which is a growing supplier. The growth of the shale gas industry in the USA makes it also an important sourcing market. Capacity-wise we stood at 5 million MTPA in 2004, which went to 10 million by 2009 and 15 million in 2016. Our ongoing expansion will make our total capacity 17.5 million by next year. For expansion site, we are looking at Bangladesh, Sri Lanka, Mauritius and Port Blair.
The benefit of this growth of LNG operations in India goes beyond the tankers and ship owners.

Anil Devli, CEO, Indian National Shipowners Association (INSA): INSA is roughly 90 years old, which tells you how old is contemporary shipping in India, representing 90 per cent of India’s total tonnage. The ship owners industry is not looked at favourably which is why 60 per cent of INSA member tonnage prefers to work overseas. We estimate that the cost of cargo movement on Indian-owned vessels is 25.96 per cent higher in Indian conditions, which means we do not stay competitive here but compete well outside.

Agrawal: India’s 7,500 km coastline is nearly U-shaped which is a great advantage. It needs to be explored.
Of our total 1,000 million tonnes of cargo handled, 55-60 per cent is being handled by the 10 major ports, which means a slight imbalance. Our ports handle 80 per cent of volume and 70 per cent value of EXIM traffic, but the logistics cost for India is 14-15 per cent of GDP. This is much higher compared to the 8-9 per cent globally and this has to come down.
In ports, the share of rail has come down from 35 per cent to 25 per cent. In the Western Ghats area, we need thought-out linkage projects because connectivity is very poor and there ports are impacted. With local issues and without focused state government support, there are delays even in sanctioned projects.

On the east coast, we have six major ports and four-five non-major ports, all doing reasonably well. But our rail connectivity is only a double-line, on which 100 trains go up and 100 trains go down. Now the third line is sanctioned, but again the land acquisition would be time-consuming and getting the third line operational could take a decade.

Sharma: Freight is just one medium-sized factor in shipping. For the person shipping the good and using the transport service, overall cost and time is the consideration. Handling at both ports and hinterland connectivity – both impact the cost and time for his overall transaction. It is absolutely non-negotiable that costs have to come down. One good operational option is to have different terminals for domestic and international traffic, just like it is done in airports. With different procedures and systems, we can have quicker turnaround and improve efficiency. For coastal shipping, SCI is quite active but we need policy support in terms of tax and cabotage laws.

Gupta: Petronet selects ship owners with a credible track record and have regular inspections and periodic meetings. LNG is a specialised commodity – it is difficult to transport, needs proper handling and inflammation risks must be contained. For our manpower requirements, we have opened an academy at Kochi which is accessible to the general public.

Devli: In our case IGST (Integrated Goods and Service Tax) means that buying and bringing a ship to India under Indian flag is 5 per cent more expensive and that extra outlay is upfront from the owner’s side. Indian flags pay 82 per cent higher tonnage tax and the fuel prices on fuel purchased in India are USD 20-30 higher than locations like Singapore or Colombo. Fuel incidentally is 30-40 per cent of operational cost. Gross wages again are 35-40 per cent higher for Indian companies because of the TDS stipulation when the person works under Indian flag. Our manning again is 20 per cent higher. All these combine to make business in India not so worthwhile. Then again, if you see FOB (Free On Board) cargo, where the customer actually pays freight, only 30 per cent is available to bid for Indian ships.

Agrawal: Manpower is a serious constraint. We need trained people with rail engineering expertise for which there is no merchant training and the Railways has little interest. Merchant institutes to train people in rail engineering, in highway engineering are needed on critical basis.