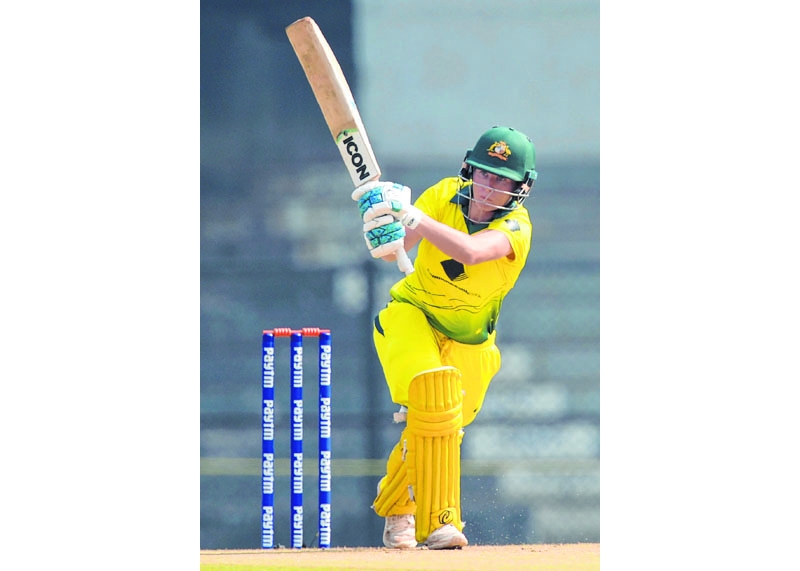 Australia cricketer Beth Mooney plays a shot during the fourth cricket match of the women's Twenty20 (T20) tri-series between India and Australia at Brabourne Stadium in Mumbai on March 26, 2018. / AFP PHOTO / PUNIT PARANJPE / ----IMAGE RESTRICTED TO EDITORIAL USE - STRICTLY NO COMMERCIAL USE----- / GETTYOUT |

Mumbai : India were knocked out of reckoning from the Twenty20 tri-series final after Australia handed the hosts their third successive defeat, the highlight of which was medium pacer Megan Schutt becoming the first bowler from Down Under to claim a hat-trick in the format.

Australia outplayed Harmanpreet Kaur’s team by 36 runs. Having failed to secure a single win in the series so far, India are without any points right now and would be aiming for a consolation win over England in their last league match on Thursday.

Australia set India a challenging target of 186 for five with the help of twin half centuries by Beth Mooney and Elyse Villani. They then restricted the hosts to 150 for 5 in 20 overs. Schutt (3-31) wreaked havoc at the Branourne Stadium by claiming a hat-trick. Her scalps included the in-form Smriti Mandhana (3), veteran Mithali Raj, who was dismissed for a duck, and Deepti Sharma (2).

While Schutt cleaned up Mandhana and Raj off the fifth and the sixth ball of the second over. She completed her hat-trick in the first ball of the fifth over by removing Sharma, who gave a sitter to Amanda Jade Wellington at mid-off, leaving the hosts in deep trouble at 26/3. Skipper Harmanpreet Kaur (33 off 30 balls) and Mumbai-batter Jemmimah Rodrigues (50 off 41 balls) stitched a 54-run stand for the fourth wicket, but that was not enough to take the home side to victory.

Rodrigues, who scored her maiden international fifty, and Harmanpreet dealt in ones and twos but the big shots just did not come through for the two. Rodrigues was guilty of giving her wicket away by chipping straight down to the fielder. Harmanpreet tried to up the ante by hitting a four and a six off consecutive balls, in the 14th over, but was dismissed off the very next ball, caught by Delissa Kimmince off Ashleigh Gardner.

Australian bowlers never allowed the Indian batswomen to settle and took wickets at regular intervals on a placid track. A quick-fire 38 off 26 balls from Anuja Patil did chip in but the asking rate had risen considerably by then.

Meanwhile, Opener Punam Raut was dropped from the 15-member Indian women’s cricket team named for the upcoming four-match ODI series against England Women to be played in Nagpur. Dayalan Hemalatha has been named in the squad in place of Raut, who was criticised for slow batting in the ODI series against Australia earlier this month which India lost 0-3. The matches will be played on April 3, 6, 9 and 12 in Nagpur.