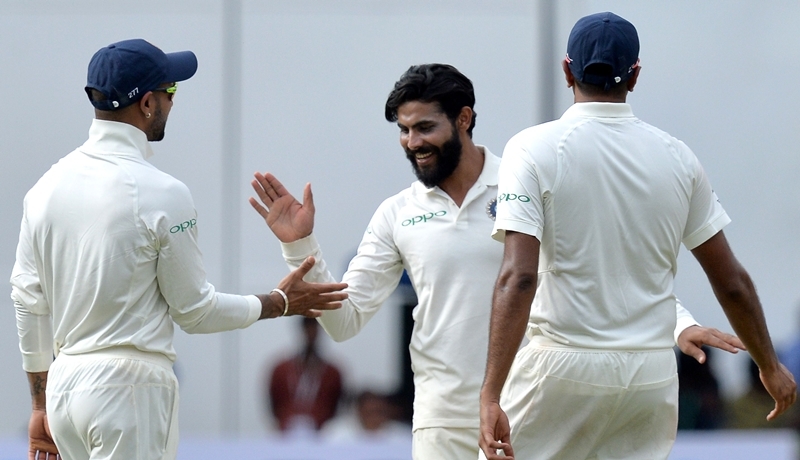 Cricket is called a game of gentlemen and there are many instances when these gentlemen engage in funny acts. A similar incident occurred during day 2 of the India vs West Indies 1st Test when Ravindra Jadeja dismissed West Indian batsman Shimron Hetmyer with a run out.

The incident happened during the 12th over of the West Indies’ batting in the first innings. Ravichandran Ashwin bowled to Shimron Hetmyer who hit a shot to mid-wicket. Hetmyer called his partner Sunil Ambris to take a run but changed his mind after taking a few steps. This created a confusion among both the batsmen and both started running in the same direction towards the wicket keeper’s end.

Ravindra Jadeja was the fielder who grabbed the ball at mid-on but seeing both the batsmen running in the same direction, he did not throw the ball to Ashwin, who was expecting a throw for run-out. Instead, Jadeja came walking towards the stumps to dismiss the batsman. Ashwin moved from behind the stumps getting a little angry over Jadeja’s act.

Witnessing this, Hetmyer started running towards the non-striker’s end so as to evade run out. Jadeja kept walking towards the stumps and threw the ball over the stumps from a distance of about two yards. Although it was a funny act of Jadeja to dismiss Hetmyer with run-out, Jadeja was quite lucky as the ball did not miss the stumps. To watch the video, check the link below.

This act of Jadeja was very much appreciated by fans who posted comments and memes on social media related to the incident. Have a look at some of such posts.

What an all performance by sir ravindra jadeja ,
century, run-out and 1 wicket in match .
Can we see a 5wicket hall?
@imjadeja #INDvsWI #NerolacCricketLive #AskTheExpert

When sir Jadeja bats he want Century, when he was on field he want Run-out nd when he is bowling he wants wicket Wowww!!!👏👏 @imjadeja #INDvWI pic.twitter.com/PBeEzyAZB1