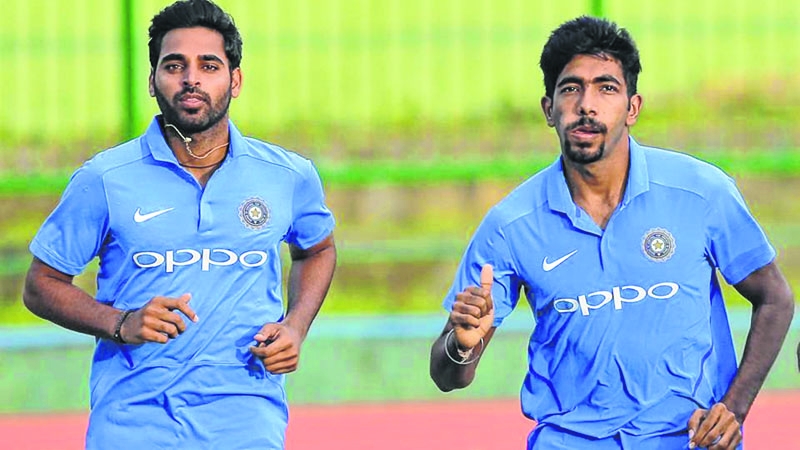 Pune: Handed a reality check after West Indies salvaged a morale-boosting tie in the second game, India will be hoping to put up an improved bowling show with their frontline pacers Bhuvneshwar Kumar and Jasprit Bumrah back in action for the third ODI here on Saturday.

A well-oiled India hammered the Windies in the lung opener in Guwahati by eight wickets, but the gritty visitors indeed, made a statement of sorts in Visakhapatnam, by denying the hosts a victory and a chance to go 2-0 ahead in the five-match rubber. However, the absence of Bhuvneshwar and Bumrah saw Indian bowling unit being clobbered for 320 plus runs in both games.

With more variations in their repertoire in white ball cricket compared to the profilgate Umesh Yadav and an inconsistent Mohammed Shami, Bhuvneshwar and Bumrah are expected to make a significant difference, especially in the first Powerplay and the death overs.

India also have issues to ponder over even as only 16 games are left before the World Cup in England next year — the fragile middle-order and lack of consistency from the lower-middle order batsmen — when they take field at the MCA International stadium.

Skipper Virat Kohli, who surpassed iconic Sachin Tendulkar to score fastest 10,000 runs, has always been the backbone of the team. His back to back hundreds (140 and 157 not out) is just a testimony to it. The skipper, who has scored 297 runs so far in the series, will be aiming for a big knock again.

Ambati Rayadu, whose 73 consolidated his claim No 4 spot and a good show on Saturday, will only help him make the position his own. But questions remain on a stable numbers 5, 6 and 7. Veteran Mahendra Singh Dhoni (20) again looked out of sorts in the second ODI and with his ability to finish innings on the wane, the stumper will be under immense pressure to perform.

A big score is expected from young Rishabh Pant, who has got the ability to go all guns blazing. The team management is expected to persist with him for his game-changing ability.

The dew is a big factor during day-night matches in India, something that will worry Kohli since both his wrist spinners Kuldeep Yadav and Yuzvendra Chahal were finding it difficult to grip the wet ball. Senior spinner Ravindra Jadeja will have to pull up his socks and can’t afford to be too inconsistent with only a few places up for grabs going into the World Cup.

For the visitors, their biggest asset is young Shimron Hetmyer, who scored a scintillating 94 in the last game after an attractive 106 in the opening encounter. The 21-year-old southpaw would be raring to go at the Indian bowler’s once again.

Wicketkeeper-batsman Shai Hope with his hundred in Visakhapatnam has proved that there is more to his game than the attractive 30’s. But apart from these two, West Indies would be hoping that the others like Kieron Powell, Chanderpaul Hemraj and Rovman Powell step up and deliver.

Their senior pros like experienced Marlon Samuels (13 runs) and skipper Jason Holder (50 runs) haven’t really played to their potential. The duo will look to make amends. The bowling attack will be spearheaded by Kemar Roach but he has been leaking runs along with their spinners Devendra Bishoo and Ashley Nurse.

The trio along with the others including Holder and Oshane Thomas will need to come up with something special to restrict a ruthless Indian skipper and the others, who can hammer any bowling attack.