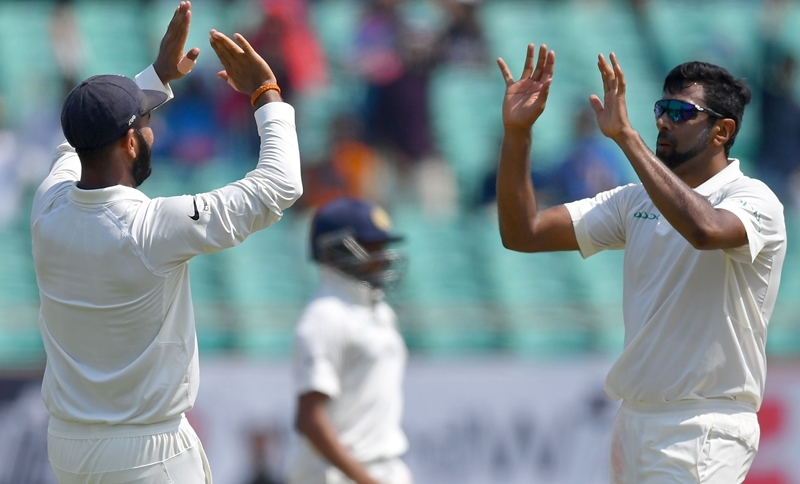 Rajkot: Spinner Ravichandran Ashwin produced a brilliant spell as India enforced the follow-on against the West Indies after bowling out the hapless visitors for 181 in their first innings on day three here on Saturday.

At lunch, the West Indies were 33 for one in nine overs in their second innings with Ashwin removing skipper Kraigg Brathwaite (10) for his fourth wicket of the day. The visitors still trail by 435 runs and face a herculean task of saving the game. Kieran Powell (21) and Shai Hope (0) were in the middle when lunch was taken.

The West Indies, resuming their first innings at 94 for six, lasted only an hour and 10 minutes, mainly due to efforts of Roston Chase (53) and Keemo Paul (47) who ended up sharing a 73-run stand. Ashwin ran through the tail on a pitch offering plenty of turn, ending with four for 37 in 11 overs as the West Indies were all out in 48 overs.

India started with spin-pace combination of Kuldeep Yadav and Mohammad Shami. Surprisingly, Chase and Paul had little difficulty in picking the chinaman, who bowled the first over the day.

Paul went on the offensive straight away, sweeping Kuldeep for two crisp boundaries.

Paul was the aggressor in the partnership but Chase also came up with a few attractive shots. Paul was comfortable against Kuldeep but had issues dealing with the short ball. Umesh Yadav set the West Indian up nicely before getting rid of him with a perfectly placed bouncer as he mistimed a pull to be caught at midwicket.

Ashwin then removed Chase with a beauty, a flighted ball that turned in viciously to create a big gap between bat and pad before crashing into the stumps, leaving the West Indies at 159 for eight. Number 10 and 11 were easy meat for Aswhin who sent them back with the away turning ball.

With a huge 468-run lead, India expectedly enforced the follow-on with less than an hour to go for lunch. Like Paul at the start of the day, Powell too went for his strokes and dispatched Ashwin for a straight four and six in the second over of their second innings.