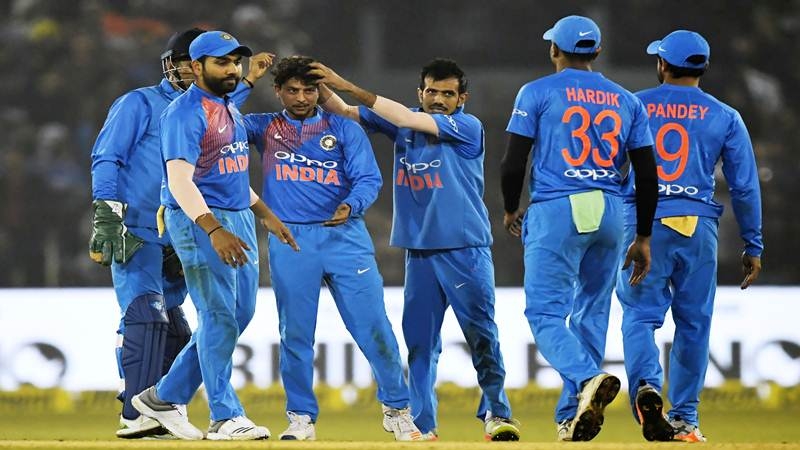 Since registering a win by 6 wickets vs Bangladesh at Colombo (RPS) on April 4, 2017, Sri Lanka have lost six consecutive T20Is. They have lost five successive matches vs India since February 2017. Sri Lanka’s 87 is their second-lowest total vs India inT20Is – the lowest being 82 at Visakhapatnam on February 14, 2016. Yuzvendra Chahal (4/23) has registered his second best bowling figures in T20Is next only to the 6 for 25 vs England at Bengaluru on February 1, 2017.

Chahal became the third Indian bowler after Ravichandran Ashwin and Ashok Dinda to take four wickets vs Sri Lanka in a T20I. Chahal has received his second Man of the Match award in T20Is – his first being for producing a career-best bowling performance. Chahal has bagged 19 wickets at an average of 14.36 in ten matches – the most by a bowler in T20Is this year. Mahendra Singh Dhoni (39 not out + 4 dismissals) became the first Indian wicketkeeper to post 35 or more runs and effect four dismissals in the same T20I, joining SouthAfrica’s Quinton de Kock (twice) and Pakistan’s Kamran Akmal.

Mahendra Singh Dhoni’s batting record as number four player has been excellent – his aggregate being 244 in eleven innings (seven times not out), including a half-century – 56vs England at Bengaluru on February 1, 2017. His strike rate of 134.01 is quite impressive at this batting position. For the third time in a T20I, Dhoni has effected four dismissals – the first two instances were against Afghanistan and Pakistan. Dhoni is the first wicketkeeper to effect four dismissals in T20Is involving India and Sri Lanka.

Rohit Sharma has totalled 1502 runs at an average of30.04 in 62 innings and became the 14th player overall and the second Indian batsman after Virat Kohli (1956) to race to 1500runs or more in T20Is. Ten times in his international career, Rohit Sharma has been dismissed by Angelo Matthews – the most occasions a bowler has claimed his wicket. Lokesh Rahul has recorded his third innings of fifty-plus in T20Is – his first against Sri Lanka.