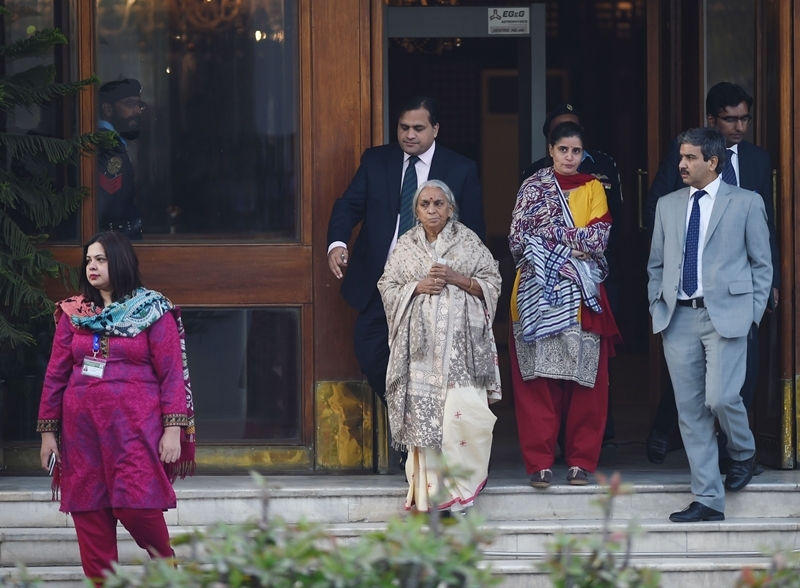 The wife (3R) and mother (3L) of Kulbushan Sudhir Jadhav,an Indian national sentenced to death for spying in Pakistan, leave after meeting with Jadhav at the Foreign Ministry in Islamabad on December 25, 2017. Pakistani authorities allowed an Indian national sentenced to death for spying to see his family for the first time since his arrest, a rare and highly-anticipated meeting arranged amid tight security in Islamabad. / AFP PHOTO / FAROOQ NAEEM |

New Delhi: A day after the wife and mother of former naval officer Kulbhushan Jadhav met him in Islamabad, India called it a sham, taking serious objections to the conduct of Pakistan and the way its officials arranged the meeting disregarding all “sensibilities.”

It regretted the manner in which Pakistan conducted the meeting, asserting that it violated the letter and spirit of understandings, and raised questions over the health and wellbeing of the Indian national. In a strongly-worded statement, the Ministry of External Affairs said the exercise lacked credibility and Jadhav was visibly under considerable stress and speaking in an atmosphere of coercion.

“Most of his remarks were clearly tutored and designed to perpetuate the false narrative of his alleged activities in Pakistan,” it said, stressing that Jadhav was giving cached answers; he looked weak and worn out and it was clear that he was speaking under physical duress.

It also slammed Pakistan for unleashing the media to harass the visitors who were heckled needlessly. Later, on the pretext of security, the family members’ cultural and religious sensibilities were violated.  “The infringements included removal of mangal sutra, bangles and bindi, as well as a change in attire that was not warranted by security,” the statement said.

“Change of attire was not warranted by security. They were also asked to take off their shoes. After the meeting, despite requests the shoes of Jadhav’s wife were not returned,” the statement said, noting that the duo was not allowed to interact in Marathi.

Avanti Jadhav, mother of Kulbhushan, told External Affairs Minister Sushma Swaraj that during their 40-minute meeting she told her son not to lie and just tell the truth that he had come to Pakistan just as a businessman. Despite the anger over the humiliating treatment, Pakistan’s Foreign Office spokesperson dismissed India’s objections as “chhoti si baat (a trivial matter).” Pakistan’s public relations pitch has come ahead of the International Court of Justice hearing India’s appeal against Jadhav’s death sentence.