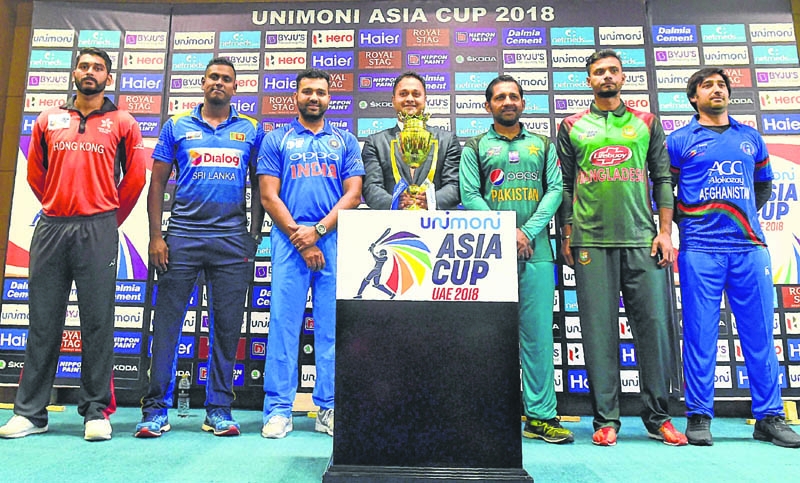 Dubai : Virat Kohli’s absence might have taken some sheen off it but the general excitement surrounding Indo-Pak encounters will be the USP of the six-nation Asia Cup starting Saturday with a Bangladesh-Sri Lanka clash here.

While there are two assured India-Pakistan matches, one in the group league and the other at the Super Four stage, the organisers, broadcasters, and the supporters will be hoping for a possible summit showdown on September 28 too.

For India, it will be a chance to see how the team reacts to pressure situations in absence of Kohli, who has been rested after a gruelling England tour, which ended with a 1-4 Test series loss earlier this week.

The team will begin its campaign on September 18 against Hong Kong, followed by the much-anticipated clash against Pakistan the next day.

While Rohit Sharma has been a brilliant white ball player, his leadership skills haven’t been tested against a quality side.

He led against Sri Lanka last December but it was a below par opposition. In fact, Bangladesh, with its resources, is a better 50-over side currently.

But the focal point would be how India India play a quality Pakistan side that has a world-class fast bowler in Mohammed Aamir, a solid all rounder in Hasan Ali, a prolific opener in Fakhar Zaman and talented batsmen such as Babar Azam and Harris Sohail.

India’s main aim would be to settle their middle-order combination and also find a perfect batting position for Mahendra Singh Dhoni during the course of the tournament.

The Asia Cup has been a tournament where Bangladesh have done well over the years. During the last edition at home, they were in final although the event was competed in T20 format.

The side under Mashrafe Mortaza has the wherewithal to compete in the 50-over format with a good bowling line-up for slower decks like the ones that will be on offer in Dubai and Abu Dhabi.

The batting comprises a mercurial Tamim Iqbal and the seasoned Mahmudullah Riyadh. Mushfiqur Rahim and Shakib Al Hasan are fantastic on their days and the team would remain a dark horse in the tournament.

Sri Lanka is one team that India have been pitted against the most in the last 24 months across formats. The team’s transition phase is taking too long and internal issues like administration of the Board and pay disputes have plagued them for quite a while now.

However, they have a lot of experience in Angelo Mathews, Upul Tharanga, Thisara Perera and Lasith Malinga with youngsters such as Akila Dananjaya, Dasun Shanaka and Kasun Rajitha.

Sri Lanka’s problem has been their consistency and they will hope to do course correction.

For Afghanistan, it will be a tournament to show that there is more to their side than a global T20 superstar in Rashid Khan. With the likes of Mohammed Shahzad in the line-up, the Afghans will be hoping to create an upset or two.

Last but not the least is Hong Kong, led by a player of Indian origin Anshuman Rath.

It is a team of semi-professional players, who migrated to the country in search of greener pastures. Their main aim would be to remain competitive as their matches have now been accorded ODI status.

Meanwhile, the BCCI has sent five India A bowlers to help the senior team during the net sessions ahead of the Asia Cup, starting in Dubai Saturday.

Three pacers — Avesh Khan of Madhya Pradesh, M Prasidh Krishna of Karnataka and Siddarth Kaul of Punjab — along with left-arm spinner Shahbaz Nadeem and leg-spinner Mayank Markande will be bowling at the nets for the next three days.

Save Avesh, the other four were a part of the India A and B squads in the recently concluded Quadrangular series which also had A teams from Australia and South Africa.

Kaul was also a part of the senior team during the limited overs leg of the UK tour.

However, with the Vijay Hazare Trophy (National One-Dayers) starting from September 19, it is expected that the players will be sent back on time to represent their state teams.

“Not everywhere do you get quality net bowlers and it becomes a problem for the senior team during practice sessions. With back to back games, you don’t expect a Bhuvneshwar Kumar or a Jasprit Bumrah to bowl flat out at the nets. Also the young academy bowlers at times can’t provide quality practice. Hence we have got some of our next line of bowlers,” a senior BCCI official told PTI Friday.

“This is a process that proves to be mutually beneficial for the team. While senior batsmen get quality practice, someone like a Mayank Markande can learn a lot by bowling at the India nets. Also the senior players and the coaches can only keep a tab on the talent pool,” he added.

The process was started before the tour of South Africa when the likes of Avesh, Basil Thampi were sent to South Africa for net sessions.

Around 10 members Indian team under stand-in-skipper Rohit Sharma had their first net session on Friday.

The ones who were a part of the England Test series are expected to arrive on Sunday evening and join the training on the eve of the Hong Kong match on Monday.

India start their Asia Cup campaign against qualifiers Hong Kong on September 18, followed by their encounter against arch rivals Pakistan on September 19.  P