India everywhere at Davos, from billboards to platters 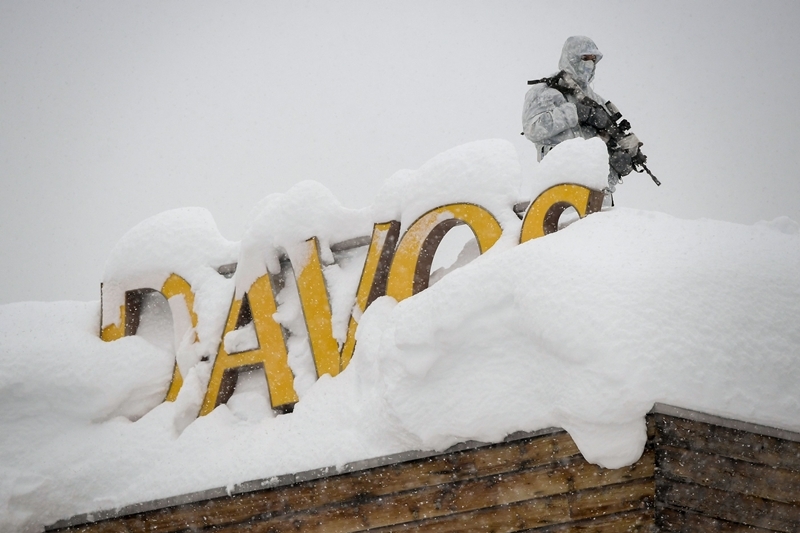 An armed security personnel wearing camouflage clothing stands on the rooftop of a hotel, next to letters covered in snow reading "Davos", near the Congress Centre ahead of the opening of the 2018 World Economic Forum (WEF) annual summit on January 22, 2018 in Davos, eastern Switzerland. The World Economic Forum (WEF) runs through January 23 - 26, focusing this year on the theme "Creating a Shared Future in a Fractured World". / AFP PHOTO / Fabrice COFFRINI |

Davos: Its India everywhere in this snow-covered Swiss resort town — once known for health tourism, always frequented by skiing enthusiasts and home to the annual week-long pow-wow of global elite in sub-zero temperatures. For now, it teems with huge billboards atop buildings and even on buses, promoting India and Indian companies, while the narrow roads made even narrower by heavy snowfall are full of lounges set up by the private and public sector from the country where Indian delicacies are flying off the counters.

Chai and pakodas are in high demand and so are vada pao and dosas. The choices to sit and munch over are plenty — there is the Indian government’s official India Lounge, while Andhra Pradesh and Maharashtra governments too have set up their own lounges. Then, there are plenty of Indian companies with their own setups alongside those of the global ones.

The five-day WEF affair seems to be bigger this year and so does the snowfall, as the first day itself saw roads getting closed and serpentine traffic since morning. Flush with nearly three times its usual population, the Swiss resort of Davos is teeming with black business suits for the WEF annual gathering, but it still cannot deter the skiing enthusiasts and those coming for medical tourism.

There are warnings that the snow-laden town in the Swiss Alps can see temperatures dipping to as low as minus 30 degrees this season. But that does not seem to have dampened the spirits of those having come to the annual talkathon of the rich and powerful from across the world — something that has become synonymous with this place for nearly five decades now.

PM BY ROAD TO DAVOS

PM Narendra Modi in Zurich on Monday from where he will travel to Davos by road.

At Davos, he will attend the ‘World Economic Forum’ where he will deliver the opening plenary address on Tuesday. He will also host a dinner for global CEOs.