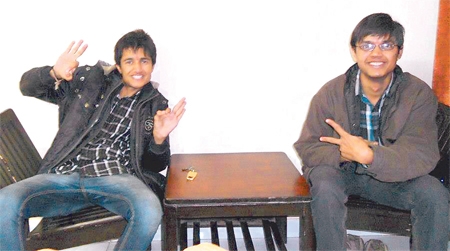 Indore: The only way to truly succeed in life is putting our heart, mind and soul into every little action and that is what makes us happy, alive and successful in life. With his positivity and commitment, 25-year-old student Saransh Thatte has battled epilepsy and despite hardships, he has been able to become an inspiration for his friends and family members.

Talking about his life, Saransh said, “I have recently completed my MBA in HR and Marketing, which seems like an achievement considering that most people around me felt that I might not even complete schooling.” Sharing the incident that changed his life, he talked about epilepsy attack that changed his life in class third.

“I was in class third, sitting and eating food with my family, when my body temperature went up the roof and my eyes rolled back,” Saransh narrated. With the blink of an eye, he had lost consciousness.

As he gained consciousness in the ambulance, Saransh questioned his parents, “Why are you taking me to hospital?” And after that, he had to regularly take medication for controlling the attacks.

As most kids played on the school field, Saransh played and tried to live a normal life too. “Unfortunately, I would get the attack just out of the blue and faint on the field while playing games as well,” he said.

Throughout his school life, Saransh had to battle his illness and compete with it to survive and live a normal life. “Medication reduced over time and now, I have to take three doses in a day, which is good,” he said.

As he passed school, Saransh also passed the test of life and won the battle over epilepsy. “Thankfully, I have not had any attack since I passed school and college has been great,” he said.

Discussing what kept him going despite the regular attacks, Saransh said, “There is no reason to stop, no matter what, life goes on whether it is rocky or smooth.” He considers the attacks as rough patches that hurt his life temporarily.

Counting his blessings, Saransh said, “I have been so lucky to have supportive friends and my best friend, my brother Sandhrav.” He elaborated as a shadow Sandhrav took care of his elder brother through-out school life.

“As we have grown up and I am better now, we are still best buddies who share everything and make our decisions together,” Saransh said. Further, discussing the battles he has won overtime, he talked about working for companies, travelling alone in city buses and working on his weaknesses.

Elaborating on developments, Saransh said, “I have recently started working on my right hand, which had a little co-ordination problem.” Coming from a humble background, he has still found a way to be educated and successful in his life.