How Mumbai restaurants are giving tantalising twists to street food 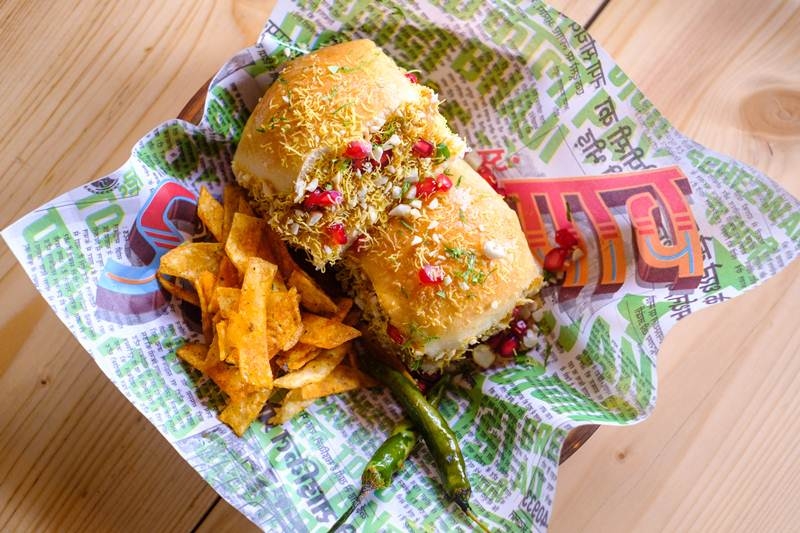 From pav bhaji to golgappas, restaurants put their own spin on street foods. When adapted  by restaurants in the city, street foods take one back in time, into one’s childhood, and also into the future. Here’s how they do it, finds Maithili Chakravarthy.

Hunger is hunger. That feeling of abdominal emptiness, pushing one into a frantic search for its complement – food. One finds oneself rummaging through larders and secret drawers in houses where special snacks are stashed away in order to find something that will instantly put one out of one’s misery.

Once something satisfactory is found, it is immediately relished. The object of enjoyment – the snack – is for many people the kind one finds on the streets. The vendors of such items often put their abilities to make something delicious, in a matter of minutes, into the food. Can upmarket restaurants mimic the process, albeit in a more refined way? Do guests on tasting an upcycled version of street food in an upmarket eatery still reminisce about the bhel they ate from the bhelwala below the office, or the sandwich they ate from across the street? 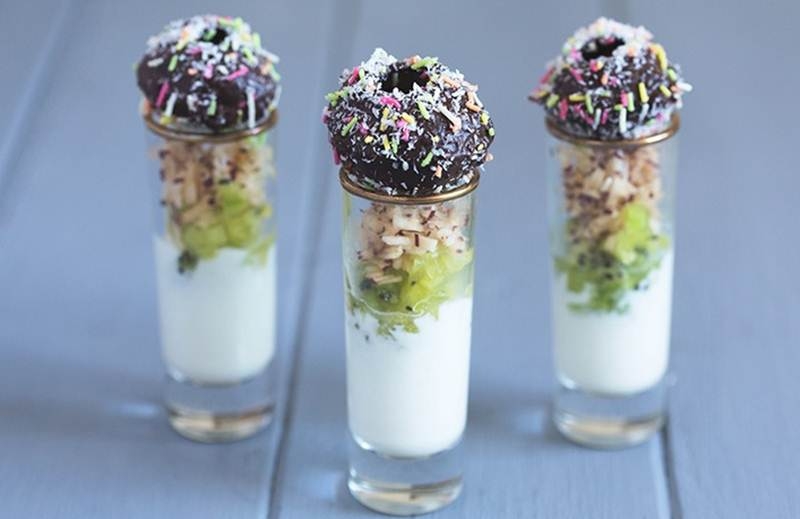 Farzi Café employs the art of molecular gastronomy into its cuisine. Its Kachchhi Dabeli, Fresh Pomegranate and Peanut Butter Sauce is a dish of steamed buns cut into two pieces with peanut butter inside along with stuffed potatoes. The dabeli is topped with peanuts, fresh pomegranate and nylon sev. The twist in the dish is that it replaces the pav with a Chinese bao. The Café’s Mini Raj Kachori has a stuffing of pumpkin and is plated with crisp okra on the side, and clouds of chutney foam on the top. “The Raj Kachori is not heavy. It is a hit amongst women. It’s like a salad,” says Kunal Patkar, Outlet Chef, Farzi Café.

The Café’s Vada Pav Farzified is like an upside down vada pav where the stuffed pav is coated with the vada mixture and garnished with a tempered chili, and served “Farzi-style”. “The Vada Pav Farzified offers an experience of the raw flavours from the streets of Mumbai. This cheap street food snack, originated in Bombay and is now available at most food stalls and restaurants across India,” continues Patkar. The eatery’s menu also features the Rajasthani Pyaaz Ki Kachori with Masala Asparagus and Aloo Rassa Reduction. Available characteristically on the streets of cities like Jaipur, the restaurant has changed the dish around serving small kachoris filled with raw onion making them crunchy, and topping the kachoris with a tangy, pungent mixture of asparagus and water chestnuts. An aloo rassa reduction which has been made using ghee adds moisture to the kachoris. 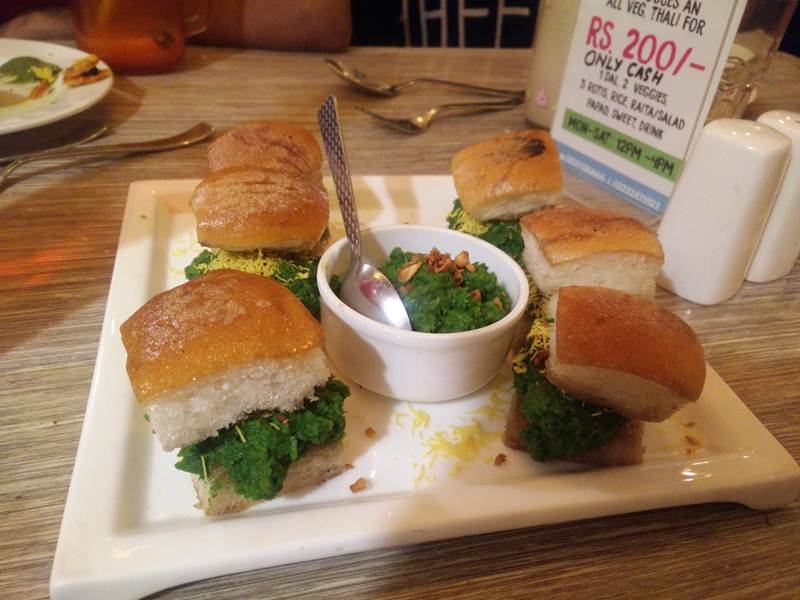 Pav Bhaji as one knows it, has traditionally been a dish of zesty, red bhaji, with butter melting into a liquid pool on top of it. Fort 001 serves it green. The traditional bhaji has been re-scripted at this restaurant and consists primarily of green tomatoes! “Why would someone want to eat what they eat on the streets in a restaurant too? Our Hariyali Paav Bhaaji, which is a modernized version of pav bhaji, is Jain by default, and has spices similar to the regular pav bhaji,” adds Harsh Parekh, the owner. The much-adored Maggi was never street food but its popularity has led it to be served on the streets. There has been a movement from stores to homes to the streets to restaurants for Maggi. At Fort 001 one can order Maggi arancini balls which are deep fried.

At the Flea Bazaar Café which opened its door to people on 7 April this year, Bombay’s Best Super Pao serves Black Bhaaji Pao and Sweet Potato Dabeli. The Black Bhaaji Pao is different from a regular pav bhaji in that it uses Maharashtrian garam masala which is black, and the dabeli on the brand’s menu is a dabeli with the nectarous filling, with chopped peanuts and nylon sev dispersed on top of it. “People enjoy street foods because they are not heavy. Ours is a clean and simple concept. While conceptualising our menus and choosing ingredients we look at economics and price points too. Our dishes have to be economical. With this concept we wanted to give newcomers an opening. The food should be delicious and great-looking too.  There’s ample seating here and people can make a night of it. Here we give a product its rightful place,” says Gresham Fernandes, Culinary Director at Impresario Handmade Restaurants, the company behind the concept and the restaurant.

Eateries across the city are thus turning street food upside down to create new versions – those that will appeal to guests who are becoming increasingly health conscious, and those that pack a punch into the street-side version. 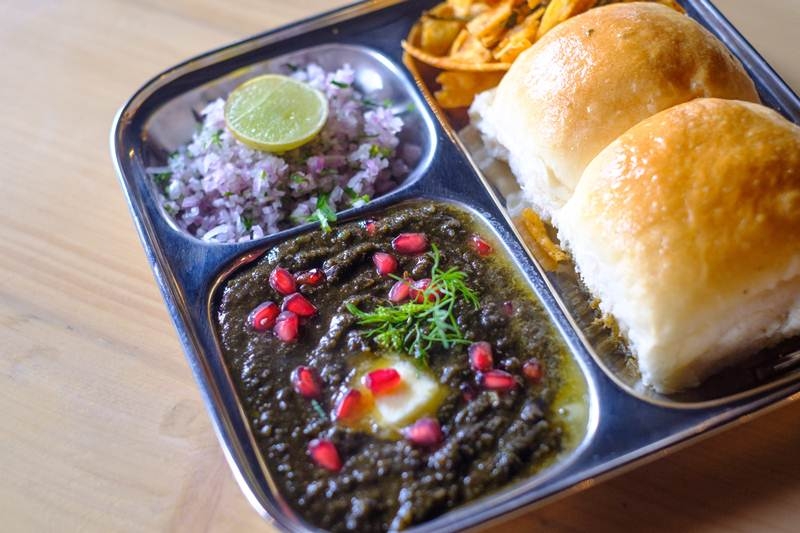 Goila Butter Chicken which has outlets all over the city has on its menu chocolate golgappas. Studded with sprinkles and filled with salted caramelized peanuts (instead of boondi) these golgappas instantly call to mind images of standing at a golgappa stall at GK, stuffing one’s face with fluffy puris oozing with sour and saccharine water. The company’s Tandoori Chicken Chaat is a chaat of shredded Tandoori chicken which has been chargrilled. It has a shahi jeera vinaigrette, with pomegranate and peanuts sprinkled on top to give it the look and feel of a roadside chaat.

One reminisces about times when after college, famished, one of the best reinforcements was relaxing with best friends outside college, feasting on dosas available just outside, or relishing the fried rice and Manchurian available at the corner stall in the lane. At Soam, one can order a red rice and cucumber dosa mixed with spices – a hearty twist to the pancake that city-dwellers adore. On the monsoon menu one can even find a Tangy Mango Bhajiya to complement the weather outside. “My mother used make these at the beginning of the rainy season when ripe mangoes and raw mangoes were still available. Adding them to the Soam menu was my way of reliving those happy childhood memories, and probably creating some for our guests too,” says Pinky Chandan-Dixit, owner of Soam. 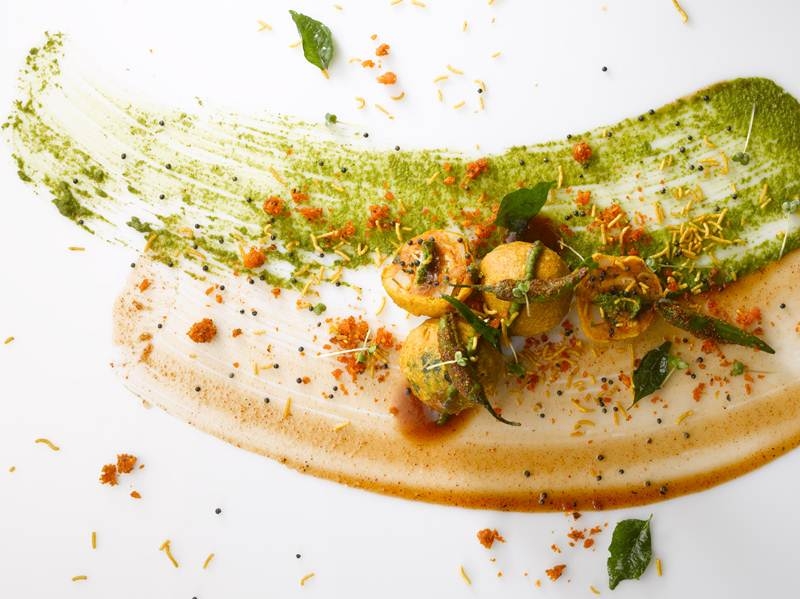 In the hot summers of Mumbai, one often finds the need to cool the insides with icy, refreshing drinks like nimbu pani! Restaurants like Ziya in Oberoi serve shikanji, a drink famous in North India, spiking the drink with a spirit of the guest’s choice, thus turning a simple street-side fresh lime juice into a cocktail. Meals like Dilli Chaat and Kasundi Salmon are washed down by the inebriating concoction.

Sometimes restaurants reverse the street food influence by adding elements of street-smartness to a commercial item. The Masala Diet Coke at Ziya is one where the secret recipe has been tinkered with by adding spices, black salt and jeera to the drink. Hence one sees that street foods when served at bistros acquire unique pride of place, in flavour, in colour, in shape and size, and in appearance.