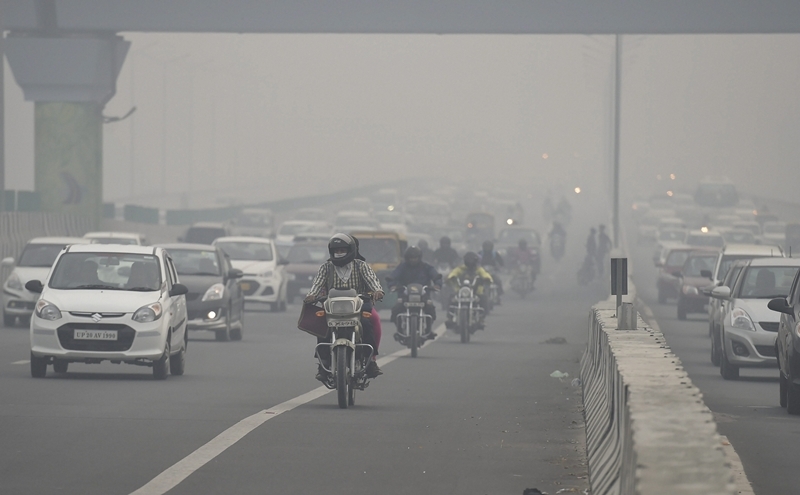 “Overall air quality in Delhi is in severe plus zone and it is expected to remain in the severe range until tomorrow (Tuesday).

“It might touch very poor levels thereafter,” System of Air Quality and Weather Forecasting And Research (SAFAR) said in its daily pollution analysis.

The agency considered the fall in minimum temperature a major cause for the pollution to reach hazardous levels as drop-in mercury brings with it a “huge amount of moisture near the surface” and presence of humidity hampers dispersal of pollutants.

“There is a significant fall in temperature which has brought down the boundary layer significantly with huge amount of moisture beneath,” SAFAR said.

According to the India Meteorological Department (IMD), the minimum temperature on Monday slightly increased to 4.6 degrees Celsius from Sunday’s 3.7 degrees Celsius (the coldest so far in December in the past four years) due to easterly winds.

The Met forecast a chilly weekend ahead as temperatures might fall to 3 degree Celsius around New Year. The maximum temperature was likely to hover around 22 degree Celsius and might remain the same over the next few days. As per the Delhi Pollution Control Committee (DPCC), the major pollutant at many areas was PM10.

The other hotspots with hazardous levels of PM10 include R.K Puram (903), Mundka (826), Dwarka Sector-8 (824), Jawahar Lal Nehru Stadium (714), and Jahangirpuri (781). In terms of pollution, the SAFAR said that a shallow thin layer of Radiation fog has been developing over Delhi which increases the share of finer particles like PM2.5 and “significantly PM10”.

“The levels of gaseous carbon dioxide has also increased to moderate levels due to advection,” the agency said.

Experts advised against all physical activities outdoors, including morning walks.

“Do not to rely on dust masks for protection against pollutants. Instead, use N-95 or P-100 respirators when stepping outdoors,” an expert said.