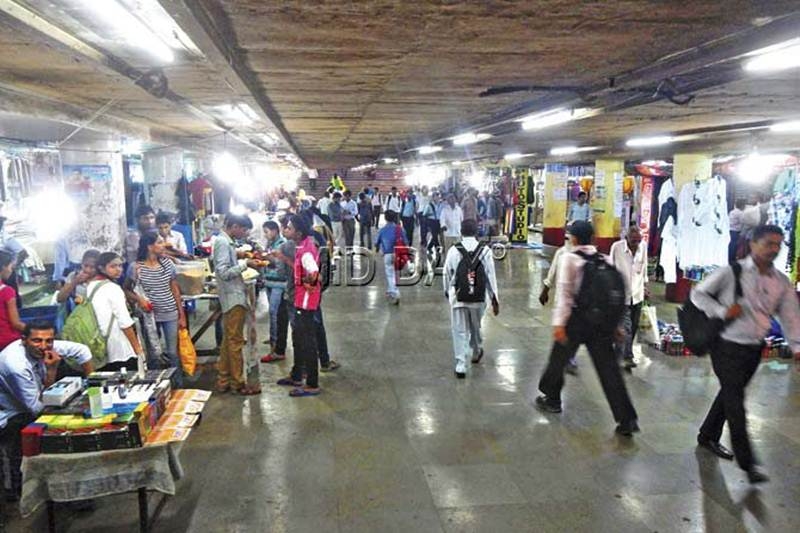 Mumbai: The Mumbaikars will soon have a free walk in the crowded subways at CST and Churchgate. The MCGM has issued eviction notices to all shops in the CST subway within 30 days. However, the shops at Churchgate subway have also been asked to evacuate.

As per the data acquired by the civic administration, about 51 shops are at CST and 22 shops at Churchgate. Everyday lakhs of people commute from these subway, making them one of the busiest pedestrian subways in the city. However, there were complaints that the owners had sub-leased their shops to others at astronomical rates.

The civic chief Ajoy Mehta had directed civic officials to make both the subways hawker-free to ensure smooth ride for commuters.

“The MCGM has issued notices to shop owners in both CST and Churchgate subways. And now the shops and hawkers will be moved out for the convenience of the people.”

Local Shiv Sena corporator, Ganesh Sanap, in several markets and garden committee meetings, had raised the issue of removal of shops from the subways. “The purpose for which these subways were built was not served as most of the place was gobbled up by shop owners and hawkers creating trouble for pedestrians. As far as revenue loss is concerned, the MCGM can recover it by putting up advertisement hoardings inside the subways,” he said.

The CST subway, having 2,870-square-metre area and built at a cost of Rs 15 crore, was thrown open to public in September 1999. The Churchgate subway had become operational in the year 1991. Temporary licences were given to the shopkeepers in both the subways.

After the evacuation of shop owners and hawkers, the civic body has planned to improve ventilation and cleanliness at the CST subway on the lines of Metro Cinema junction subway, which has no shops. Security guards will also be deployed to ensure that there are no illegal hawkers and encroachers, said a senior civic official.