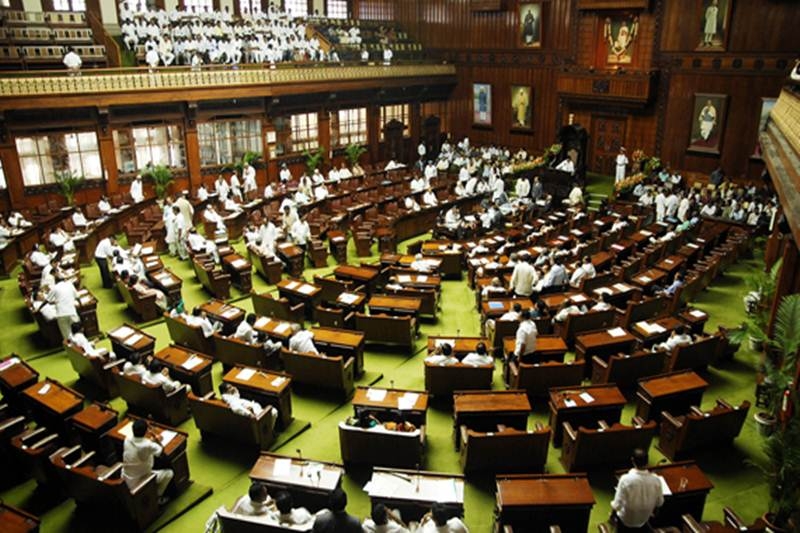 A view of Assembly session at Vidhana Soudha in Bangalore on Wednesday. –KPN |

Ahmedabad: The Gujarat Assembly is all set to ratify the Constitution Amendment Bill on GST during its two-day session beginning August 22, also the first sitting of the House after Vijay Rupani took over as Chief Minister of the BJP-ruled state, replacing Anandiben Patel.

“Apart from other business, the Constitution Amendment Bill on Goods and Service Tax (GST) will be tabled in the House for ratification,” BJP chief whip in Assembly, Pankaj Desai said today.

Implementation of GST, said to be the biggest tax reform after liberalisation of Indian economy, is still hanging fire, though the Central government recently cleared a major hurdle in its rollout by taking opposition Congress on board. The government has set a deadline of April, 2017 for the rollout.

The GST Bill, passed by both Houses of Parliament recently, needs to be ratified by at least 15 state legislatures before the President can notify the GST Council, which will decide the new tax rate and other issues.

Assam, another BJP-ruled state, became the first state in the country after its Legislative Assembly unanimously ratified the Constitution Amendment Bill on GST today.

Ahead of the session, the BJP Legislative Party will hold a meeting on August 21 to welcome newly-appointed Chief Minister Vijay Rupani, Deputy CM Nitin Patel and other cabinet members, Desai said.

Meanwhile, Leader of Opposition, Shankersinh Vaghela, slammed the government for calling the session for only two days, saying the sitting should be for at least five days so that various issues concerning common people could be raised.

“Such a short session is nothing but a mockery of democracy. This session is merely for the sake of it. BJP and its government have dumped the resolution passed in the recent Speakers’ Conference held in Gandhinagar, in which, it was decided that the House must meet for at least 40 days in a year. But, it is still not followed here,” he said.

As the House will also choose the Speaker and Deputy Speaker during the session, Vaghela demanded that the post of Deputy Speaker be given to Congress.

“Once there was a tradition in Gujarat Assembly that the post of Deputy Speaker was given to the opposition. But, it’s not the case in recent years. It’s our request that Deputy speaker should be selected from Congress legislators, and not from the ruling party,” he said.

BJP enjoys a majority with 120 seats in the 182-member House while Congress has 58 MLAs.