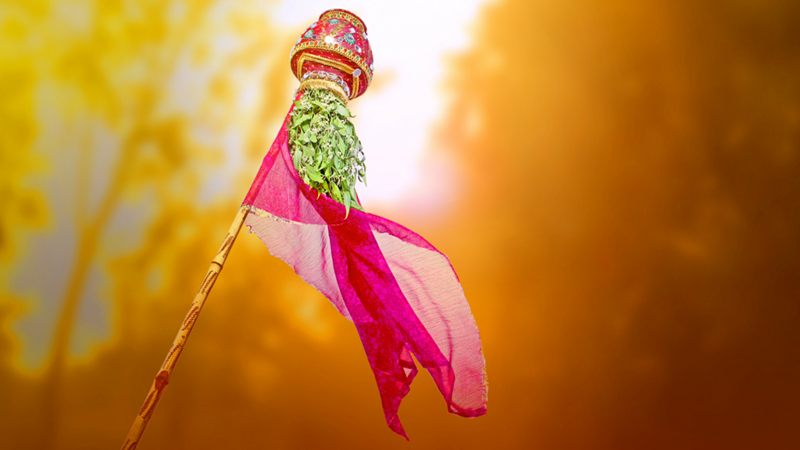 Gudi Padwa, Padva or Chaitra Shukla Pratipada is one of the most celebrated festivals especially in the Indian state of Maharashtra. It celebrates the beginning of the traditional Hindu year and the day of the festival is the first day of the Chaitra month of the Hindu calendar. It is the Marathi name for the festival ‘Chaitra Shukla Pratipata’ which is celebrated to welcome the Hindu New Year. In general, major Vedic festivals and cultural events mark the welcome ceremony of the March month as it is the spring which is closely associated with agriculture. Considering as the significant traditional festival, Gudi Padwa is known by various names across the country such as Gudi Padva in Mrathi, Ugadi in Telugu and Yugadi in Kannada.

Just like there are reasons behind the occurrence of natural events, every cultural festival in India has a reason behind its celebration. The entire celebration of Gudi Padwa revolves around three major reasons:

First, it is believed that Lord Brahma created the cosmic universe on this day. When the worship of Lord Brahma is complete, the Gudi is hoisted and Lord Vishny is invoked to shower his blessings upon the worshipper and his family.

Second, Lord Rama, Hanuman- the incarnation of Lord Vishnu returned to Ayodhya after slaying the demon king Ravana and rescuing Sita. If we take a look at our history, Maharashtrian people observed this as a day of victory by their supreme and well loved ruler Shivaji Maharaj. The victory flag is hoisted to honour the courage and victory of this great ruler and the Gudi is decorated with the first bloom of fresh mango leaves. A silk cloth of yellow colour is draped across the Gudi and adorned with red flowers. The yellow and red colours are believed to be auspicious and symbols of fertility and well being. The area is also decorated around the Gudi. Special delicacies and sweet dishes are also prepared on this occasion.

Gudi Padwa marks another historical event, the victory of the Sakas over the Huns. But the most important significance of the Gudi Padwa is the creation of the universe by Lord Brahma. This has been mentioned in the Brahma Purana too, where the Satyayug commenced from this very day after the creation of the universe. The day is also considered auspicious because the divine consciousness which emanates during the early sunrise, if absorbed, lasts longer.