Great if some can make it to India A in next 8 months, says Rahul Dravid 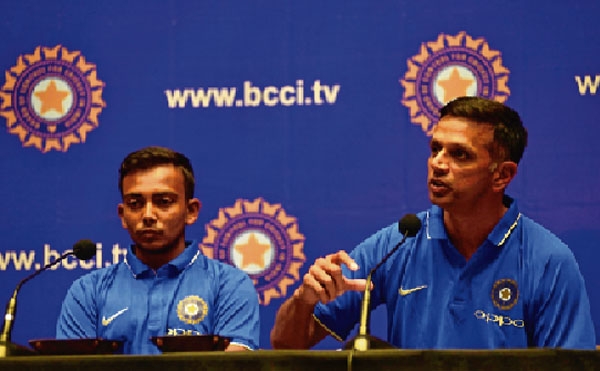 Mumbai : His tunnel vision on the “process” is legendary in Indian cricket and U-19 chief coach Rahul Dravid’s next aim is to see a few of the World Cup-bound colts included in the ‘A’ team within the next six to eight months.

“The World Cup is an exciting challenge and provides a good opportunity for all these guys. There is a process now in place in Indian cricket – U-19 cricket to first-class cricket and then to India A and then the India national team, when the opportunity arrives,” Dravid said at the pre-departure press conference of the India U-19 team.

“I have been talking to these players about other formats as well. If they can make it to the India A team in 6-8 months, it will be great. We see this as a stepping stone,” the former India captain said. The current India U-19 captain Prithvi Shaw has already played for the India A team during warm-up games against New Zealand.

Dravid however refused to predict that who among the current batch has the potential to make it big at the senior level. “I have learnt a lot in these years as coach of under-19 and India A team. These boys are from a different generation and their thinking is different. They have to adapt to all three formats. It’s a huge challenge. The game has changed a lot. “I can’t say who can go on and make it or who cannot. All of them have the potential to play for their state and India in future,” Dravid was non-committal.

On India’s chances in the upcoming global event for juniors which starts in New Zealand from January 13, DRavid exuded confidence that the team under Shaw would do well. “The conditions would provide unique challenge in that no one in the team has played in New Zealand before. The key would be in adapting to the conditions well. We have tried to replicate the condition s in the Bangalore camp to the extent possible but it’s not possible to do it completely.”

Three-time previous champions India, who finished runner-up in the previous edition has been placed alongside Zimbabwe and East Asia Pacific qualifier Papua New Guinea. The squad has a few players such as captain Shaw, of Mumbai, Shubhman Gill of Punjab, Himanshu Rana of Haryana, Ishan Porel of Bengal have been playing first-class cricket, which the coach termed as a plus for the side. “It’s always good to have players in team with some first class cricket experience. This team too has a few. The team is similar to the one we had the last time with only one major difference – that in the previous team there were people with more experience of having played U-19 World Cup.

“This team too has a good pace attack, good spin bowlers and a good batting unit like the last one,” he assured. Mumbai opener and the current big thing in Indian cricket, Shaw is happy that practice games will help them get into the groove. “We are going to play a few practice games before the World Cup. That will help us. Playing first-class cricket will be of help to me in the World Cup,” said Shaw, who already has five first-class hundreds to his credit. “It’s a great opportunity and as captain I want to take the whole team with me. Everyone in the team knows his role. I aim to win the World Cup,” he concluded.

‘Pandya making most of rare talent’

The paucity of pace-bowling all- rounders in Indian cricket played a role in Hardik Pandya being fast-tracked into the senior team but he deserves credit for making the most of his rare talent, says former captain and under-19 coach Rahul Dravid.

Dravid said having fast bowling all-rounders was always a luxury for the Indian team and Pandya has grabbed the opportunity with both hands. The 24-year-old Pandya, with his big-hitting ability down the order and  effective medium-fast bowling, has become a regular feature in India’s short format teams.

“Hardik came into the team because of himself. He is the one who has put in the performances and he is the one who has that x-factor. When you are a fast bowling all-rounder in India, there aren’t many to compete with and that’s the reality,” Dravid told reporters at the pre-departure press conference for the Under-19 World Cup team.

The former captain also felt Pandya did well to latch on to the opportunities presented to him.