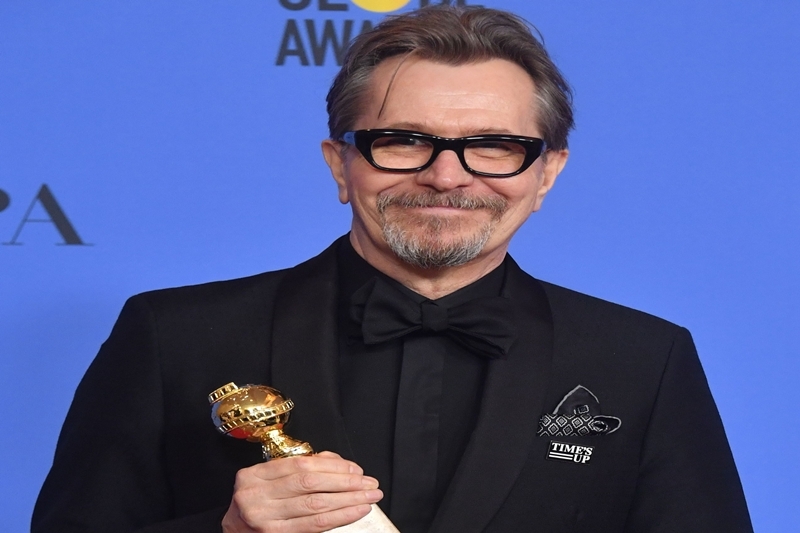 Actor Gary Oldman poses with the trophy for Best Performance by an Actor in a Motion Picture - Drama during the 75th Golden Globe Awards on January 7, 2018, in Beverly Hills, California. / AFP PHOTO / Frederic J. BROWN |

In his acceptance speech, the 59-year-old actor said he is proud to be a part of the Joe Wright-directed war epic and the film has reinforced his faith that words and actions in tandem have the power to make a difference in the world. “I’m very proud of the ‘Darkest Hour’. It illustrates that words and actions can change the world and boy oh boy, does it need some changing,” Oldman said.

The veteran actor thanked his co-stars – Kristin Scott Thomas, Lily James, Stephen Dillane, Ronald Pickup and Ben Mendelsohn. He said to Scott, “Your work is exquisite. Thank you for putting up with those awful cigars.” Oldman also paid his gratitude to his make-up team.

Oldman added, “Your artistry has no equal. You are kind, funny and patient. We got through 63 applications.” The actor also thanked his wife, Gisele Schmidt, for putting up with his “crazy”. “She used to say to friends, ‘I go to bed with Winston Churchill and wake up with Gary Oldman.’, which I suppose is better than the other way around,” he quipped.

Towards the end, Oldman thanked the Hollywood Foreign Press Association (HFPA) and Churchill. The actor has been critical of the Globes in the past. In 2009, he talked about a tussel with the HFPA at a press conference, in which he called them a TRP vehicle. He believed he was disqualified from the contest following his remarks. He even called the celebrities to boycott the awards in 2014.