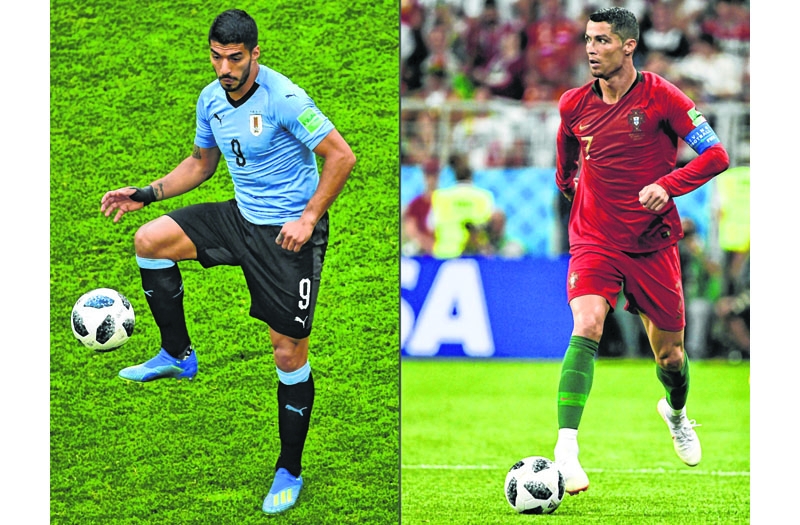 Sochi : The man who has marshalled the best defence in the World Cup so far will relish the task of trying to stop his old foe Cristiano Ronaldo when Uruguay and Portugal meet in Sochi tomorrow.

The Madrid derby comes to the shores of the Black Sea in the last 16 with Uruguayan captain Diego Godin, of Atletico, and his club team-mate Jose Maria Gimenez coming up against Real and Portugal’s five-time Ballon d’Or winner.

It will be a fascinating battle at the Fisht Stadium with Ronaldo, at 33, enjoying his best World Cup but Uruguay the only side to come through the group stage in Russia without conceding a goal.

Godin is an expert at keeping clean sheets, as the leader of an Atletico defence that is the most formidable in the European club game — they kept 34 in all competitions last season — and of a Uruguay side that has not conceded a goal in 2018 in six games.

Ronaldo, though, has already scored four times at this World Cup, including a hat-trick on his last visit here when Portugal drew 3-3 with Spain. That means he has 85 international goals, more than any other male European player in history.

In the last two years, he has scored two hat-tricks for Real against Godin’s Atletico, having also emerged victorious in two Madrid derby Champions League finals.

But the rugged and brave Godin, who needed reconstructive dental surgery after having three teeth punched out in an aerial challenge with Valencia’s goalkeeper earlier this year, has succeeded in muzzling Ronaldo on plenty other occasions at club level going back almost a decade.

“Godin is a star. He defends, commands, scores goals, wins titles, and does not miss a game,” said Diego Maradona recently.

On Saturday, Gimenez — who scored Uruguay’s late winner against Egypt — is set to rejoin Godin in central defence after missing the 3-0 victory over Russia due to injury.

Ronaldo, meanwhile, will look to get back among the goals having had a penalty saved in Portugal’s 1-1 draw with Iran. That, and the VAR-awarded late spot-kick for the Iranians, condemned the defending European champions to this tie rather than a meeting with the hosts in Moscow.

Portugal surely would have preferred that, for while Uruguay continue to produce tough centre-backs, they are by no means completely reliant on them.

This is a side with excellent, Italian-based midfielders in Rodrigo Bentancur, Lucas Torreira and Matias Vecino. And up front they boast two of the greatest goal-scorers of their generation in Luis Suarez and Edinson Cavani.

Suarez might lack the same sharpness of old, but he has still scored twice in Russia. One more and he will equal 1950 World Cup-winner Oscar Miguez’s Uruguayan record of eight goals at the tournament.

“They are a typical South American side,” said Portugal coach Fernando Santos.

“It’s not just in this World Cup that they have not been conceding goals. It has been like that for the whole of 2018. Oscar Tabarez is the longest-serving international manager. That means he has a very strong relationship with his players.”

These two countries with a combined population of 13.5 million have long been overachievers on the international scene — the last decade under Tabarez has seen two-time former winners Uruguay reach one World Cup semi-final and win one Copa America, while Portugal triumphed at Euro 2016.

And the Uruguayans hold their opponents in equally high regard, conscious that Ronaldo is supported by younger talents like Bernardo Silva and Goncalo Guedes.

“We will mark him with the same respect we mark everyone, despite him being a superstar,” said Sebastian Coates of Ronaldo. “You don’t prepare a match just looking at one player.”

COACH: Fernando Santos amassed Primeira Liga totals of 161 games and two goals during eight seasons, almost always with Estoril. After retiring, he worked as a coach for several decades, starting out at his main club in 1988.

COACH: Oscar Tabarez took charge of the Uruguay national team for a two-year spell that included participating in the Copa America 1989 and the 1990 World Cup.