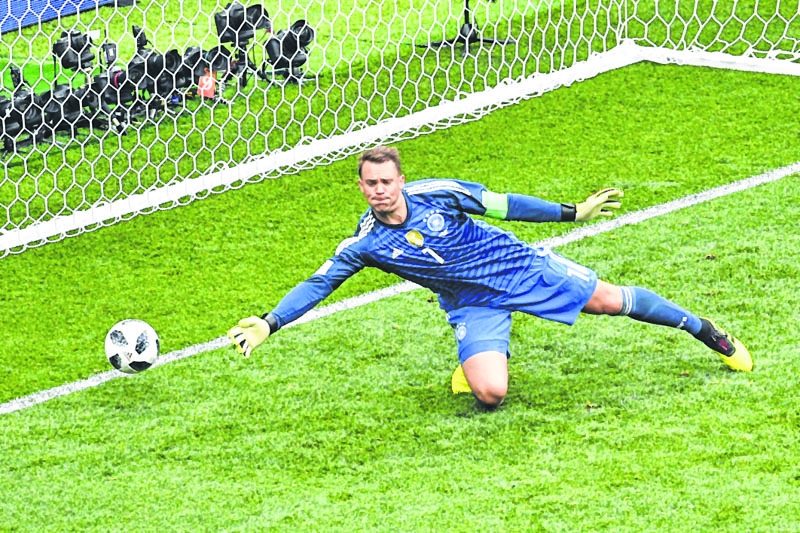 TOPSHOT - Germany's goalkeeper Manuel Neuer tries to save a shot during the Russia 2018 World Cup Group F football match between Germany and Mexico at the Luzhniki Stadium in Moscow on June 17, 2018. / AFP PHOTO / Mladen ANTONOV / RESTRICTED TO EDITORIAL USE - NO MOBILE PUSH ALERTS/DOWNLOADS |

Vatutinki : Germany captain Manuel Neuer said on Tuesday that his side’s two remaining World Cup group games are now effectively finals and revealed frank words were exchanged in the team camp as the holders fight to stay in the tournament.

The World Cup holders are under intense pressure ahead of Saturday’s second Group F game against Sweden in Sochi and the South Korea match next tomorrow in Kazan after suffering a shock 1-0 defeat to Mexico on Sunday.

“From now on, we only have finals. The players have to show what they can do, but I am convinced that we can do it,” Neuer said.

Pre-World Cup talk from the German camp was about becoming the first team since Brazil in 1962 to successfully defend the title.

Now the worry is whether Joachim Loew’s team can even reach the last 16.

“Complaining about what happened doesn’t change anything, we all know that,” said Neuer.

“We have to try to put this behind us as quickly as possible.” Neuer revealed that head coach Loew spoke at length during an emergency team meeting after the poor display in Moscow and that the players did not hold back in giving their opinion.

“There was a length team meeting,” said Neuer.

because we want to make things better against Sweden.

“We talked a lot, such meetings are good, it’s a liberating feeling and the outlines came from the coach.

“We are our harshest critics.

“It was a wake-up call and there has never been such strong communication within the team as after the game against Mexico.

“We want to reach the knock-out stages and the team believes that we can do it.”

Die Mannschaft was slammed by the German media for a dreadful first-half performance when their defence was brutally riped apart by Mexico’s counter attacks.

Neuer says all the stops will be pulled out against Sweden.

“Every player must ask himself, ‘am I ready to give everything?”, said Germany’s shot-stopper.

“In terms of the performance, I don’t think we need to change players.”

Despite the captain’s insistence that the current team can pull it off, former internationals and pundits in Germany are demanding that Loew drops Mesut Ozil and Sami Khedira after both had woeful displays against Mexico.

Neuer revealed that the players took their frustrations out in Monday’s closed training session.

“It went off, the players who weren’t involved on Sunday really threw themselves into it,” he said.

Neuer revealed that even before Loew called for crisis talks, the players were already sorting out issues amongst themselves.

“Since no one shirks responsibility, we had already talked a lot after the game, on the bus and at every meal,” he said.