Gandhigiri Act: What does it take to fill potholes? 12 good men 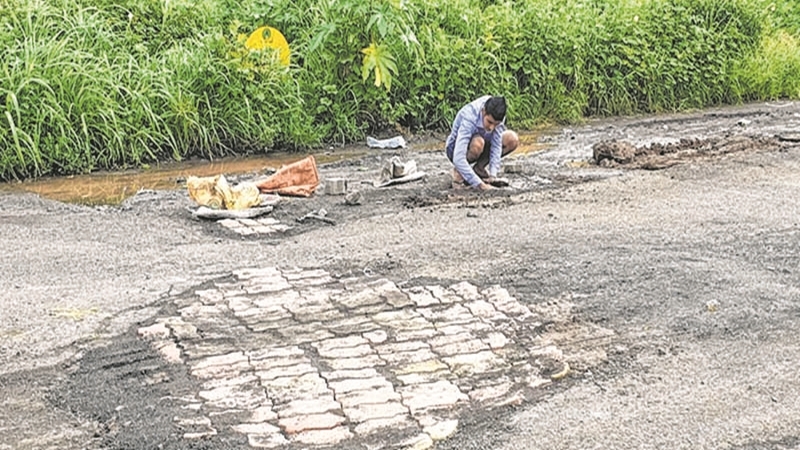 Mumbai: Despite their frustration with potholed roads, residents of Ambarnath and Badlapur decided to take the high road and in an act of ‘Gandhigiri’, instead of protesting, proceeded to fill the potholes. Mahesh Apte from Badlapur took the lead, rallying supporters to the cause on social media. Huge, crater-like potholes had cropped up on roads in this area after heavy showers, threatening the life and limb of residents using these routes. After a journey to Badlapur last week, Apte was spurred to post a message on his Facebook wall, urging all concerned residents to join him in the endeavour to resolve the issue.

He had travelled on the road near Kharvai Gavdevi temple till the junction near old Hope India company. He then posted on Facebook: “Experienced very low quality tar roads today. Seeing these roads took me back in time, this was their pathetic state 20-25 years ago. How much longer will they keep giving false assurances to the public?” Interestingly, all those who came forward in response to Apte’s message, are citizens who use this road on their daily commute. They decided to put their weekend to constructive use. Instead of sleeping in, a dozen good citizens from both suburbs came out and worked with Apte, ensuring the potholes were filled. Afterwards, they put up before and after photographs of the roads on Facebook, remarking, “We had a lot of fun working together.”

Their Gandhigiri ways are far from over, though. Apte and like-minded citizens will not stop here. They have appealed to residents to gather on September 20, at 6am, at Gandhi Chowk, to take their work further.  Apte’s latest FB post says: “There is a huge crater on the Katrap turning of Shirgaon highway. Do gather on September 20, at Gandhi Chowk.”