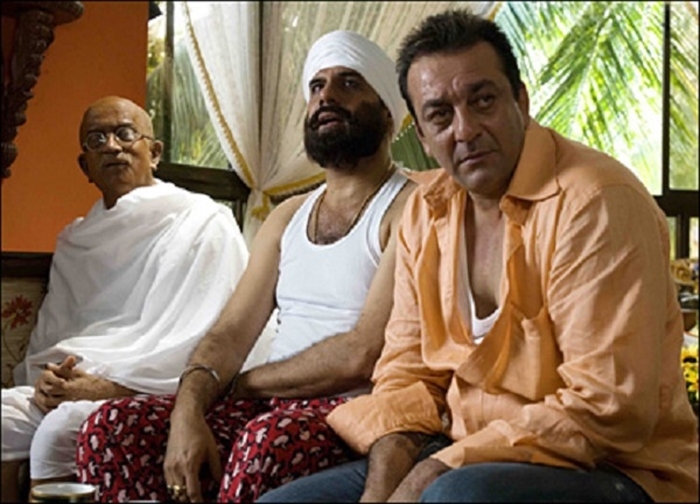 The film titled ‘Gandhigiri’, written and directed by Sanoj Mishra is readying for an October release. Starring Om Puri, Sanjay Mishra, Mukesh Tiwari and others, the film looks at the importance of Gandhiji’s values in today’s corrupt world. It attempts to answer uncomfortable questions such as if his teaching seven have any value left. More importantly, can anyone lead a peaceful life by implementing those values in day-to-day life?

If we had thought Raju Hirani’s ‘Lage Raho Munnabhai‘ which released in 2003 was the definitive word on Gandhism in today’s times, apparently there is still more left to be said on the subject. Sanjay Dutt reprising his role as Munna Bhai, a Mumbai underworld don, had started to see the spirit of Mahatma Gandhi and through his interactions with Gandhi, begun to practice what he referred to as Gandhigiri to help ordinary people solve their problems. It will be interesting to see how ‘Gandhigiri’ deals with what appears to be similar territory. That said, it is interesting to see filmmakers still find creative inspiration in Mahatma Gandhi. Here’s a look at the many stirring portrayals in cinema, of one of the nation’s – nay, international – true greats…

Gandhi directed by Richard Attenborough in 1982 stands out as perhaps the finest celluloid biography of Mahatma Gandhi. The film starring Ben Kingsley in the lead, also won him an Oscar and till today attracts repeat viewings. It gave not just foreign audiences but scores of Indians too, a first-hand lesson in the powerful yet non-violent role Gandhi played in the country’s fight for freedom.

If Dilip Prabhavalkar had essayed Gandhi in ‘Lagey Raho Minnabhai’, it was Rajit Kapoor who took on the onus in Shyam Benegal’s bilingual biography ‘The Making Of Mahatma’ in English and its Hindi version, ‘Gandhi Se Mahatma Tak’. Benegal portrayed Gandhi’s journey from being a barrister in South Africa to becoming the Mahatma. At five hours-plus, this documentary was the longest tribute to the nation’s Mahatma, at it covered details of his life, times and views.

The new millennium saw Gandhi looked at without the halo, as filmmakers dug deeper to divulge more than glowing textbooks did. In Jabber Patel’s biography on Babasaheb Ambedkar, Gandhi is painted in shades of grey; a trend that definitely raised eyebrows. With Mohan Gokhale playing the title role, it was interesting to see how Gandhi was supposedly not above using his non-cooperation policy and fasting tactics to ensure things went his way.

If Naseeruddin Shah played the Mahatma in Kamal Haasan’s ‘Hey Ram’, it was Darshan Zariwalawho played Bapu in Anil Kapoor’s production ‘Gandhi My Father’. An offbeat film, it focused more on Gandhi’s personal life and his troubled relationship with son Harilal Gandhi.

Besides these there has been Ketan Mehta’s biopic on Vallabhai Patel titled ‘Sardar’, which saw Annu Kapoor essay Gandhi. Biographies made on Savarkar, Bhagat Singh and Bose also had Gandhi in smaller roles, invariably portrayed in a negative light. Either way, the lure of the Saint of Sabarmati, who gave us freedom, “bina khadag bina dhal,” as the song in the classic ‘Jagriti’ goes, is still strong.