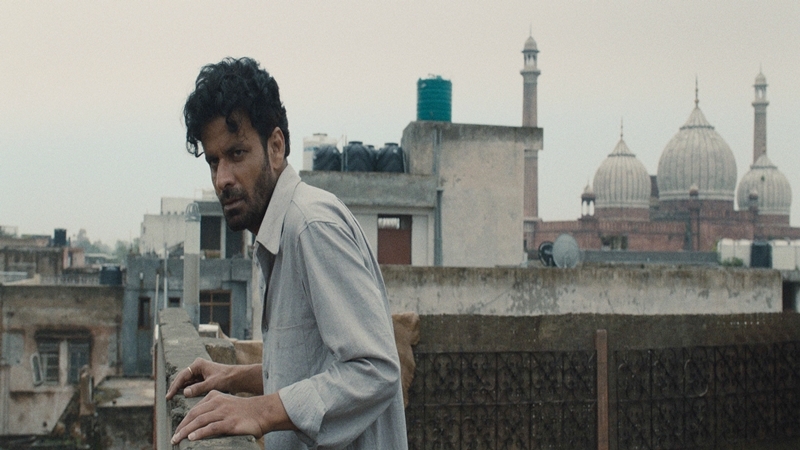 Film: Gali Guleiyan (In The Shadows)

A psychological drama/thriller about a lonely, mentally disturbed Khuddoos (Manoj Bajpayee) hallucinating about the past while living in the present, this film by Dipesh Jain is a visual maze of memories that keep slipping through the labyrinthine network of by-lanes that represent Khuddoos’ hometown as well as his troubled mind.

The studied dystopian atmosphere and the contrived, delayed thriller edge notwithstanding, Jain’s narrative works up enough power to make it all inveigling. The structure is deceptive no doubt, and the revelation at the end, not much of a surprise – but the dense, dark and threat bearing atmosphere reveal Jain’s skill as a subtle storyteller. The protagonist’s obsession with shadows and distant voices is expressed through jerry-rigged surveillance equipment. He is presented as a loner with more than just a morbid fascination for his neighbors’ intimate lives. Khuddoos is increasingly caught up in his own private torment despite helpful interventions from his only friend (Ranvir Shorey). The Shadows in the English title represent the ominous futility of escape from a life constricted by diabolic conflict.

Jain’s narrative opens with William S. Burroughs’s observation: “There are no innocent bystanders… what are they doing there in the first place?” – probably the Director’s attempt to comment on the bystander mentality in a country that is being seen as increasingly gripped by the lynch-mob menace. Dipesh Jain’s film is also an experiential exploration of mental illness through the eyes of the troubled protagonist who loses touch with reality as the narrative progresses into a complex multi-layered riposte.

Performances by Manoj Bajpayee, Ranvir Shorey, Neeraj Kabi as the father, Shahana Goswami as the mother and Om Singh as the young Idris/Idu are decidedly intense, the editing by Chris Witt lends complexity, the subtle background score keeps the involvement going while the lighting and camerawork by Kai Miedendorp makes even the darkened silhouettes, threatening shadows and eerie slivers of light look compelling. This is definitely a showcase of masterly craft, but it could do with a little more emotional engagement!