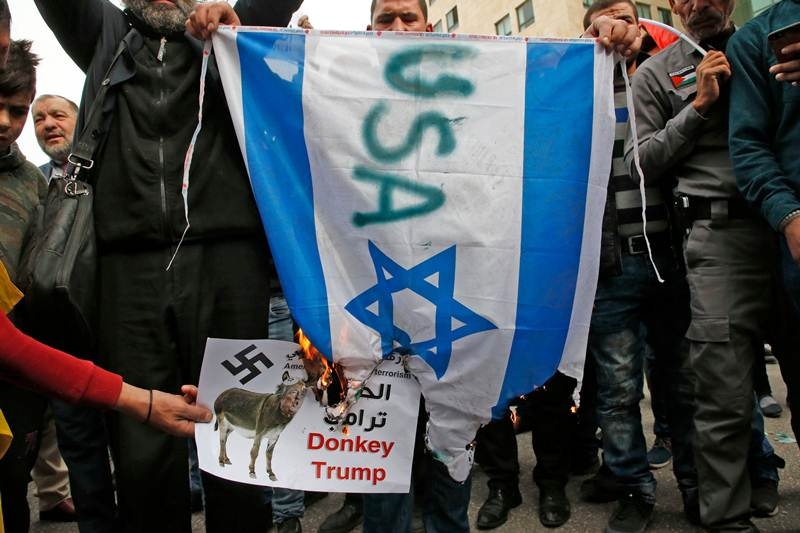 Palestinian demonstrators burn an Israeli flag and a poster depicting US President Donald Trump during a protest prior to clashes with Israeli security forces near a checkpoint in the city centre of the West Bank town of Hebron on December 20, 2017. / AFP PHOTO / HAZEM BADER |

At the Qalandia checkpoint between the occupied West Bank and Jerusalem, Israeli forces fired tear gas, sound grenades and live ammunition at around 1,000 protesters, many of whom were throwing stones, an AFP photographer said. Hundreds also gathered in the southern West Bank city of Hebron, triggering light clashes with the army. In Nablus in the northern West Bank, hundreds marched to an Israeli checkpoint, AFP reporters said.

In Gaza, sealed off by Israel for a decade, a few hundred people gathered for a protest in Gaza City. A few dozen went to the border, with minor clashes reported. An Israeli army spokeswoman told AFP that “riots” had erupted in several locations, with around “800 rioters throwing firebombs and rocks and rolling tyres at (Israeli) soldiers”.

“Soldiers are responding with riot dispersal means,” she said. The Palestinian health ministry said nine people had so far been injured, none of them seriously. Near daily protests have broken out since Trump’s controversial December 6 announcement that he would recognise Jerusalem as Israel’s capital and move the US embassy to the disputed city. Today’s protest was originally called to protest a planned visit by US Vice President Mike Pence, but he has delayed the trip.